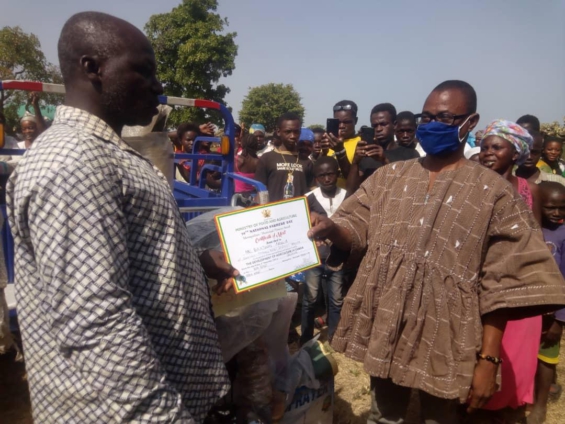 The Wa East District Best Farmer for the 2020 farming season, has advised farmers to observe Good Agronomic Practices (GAPs) in their farming activities in order to benefit from their sweat and labour.

Mr Abudulai Bajuuri, said he had personally benefited tremendously from the advice of Agricultural Extension Agents on proper farming practices and the appropriate crop variety to plant.

He gave said this advice during an interview with the Ghana News Agency (GNA) at Guonuo in the Wa East District at the weekend after the occasion of the 36th Farmers Day celebration.

“I don’t refuse advice, when the agric workers come here and say anything that we should do this and that or we should plant this type of crop that is what I do. That is what has helped me,” 41-year-old Mr Bajuuri explained.

The event which was on the theme: “Agribusiness development under Covid-19 – Opportunities and Challenges”, saw the Wa East District Assembly awarding 18 farmers, while the Sissala Rural Bank and Vision Farms also awarded 8 farmers.

He also advised the general public against bushfires, saying they could destroy farm produce, and in turn affect the finances of the farmer as well as human life.

The winner of the District’s Best Woman Farmer category, 28-year-old Amamata Sahanun, advised women farmers to develop the habit of saving money to help them improve on their farming activities.

“As a woman I do not have the strength like a man to farm. Because of that I engage labourers to do almost everything for me. When I harvest, I store some of the produce and sell them when I am ready to farm, so I always have some money to pay for the labourers,” she explained.

Madam Sahanun stated that due to the Planting for Food and Jobs programme, they had access to fertilizer at affordable prices which had enabled them to expand their farms.

The Assembly also awarded the best Assembly Member farmer and the best performing agric officer in the District.

In all, 18 people received awards for the various categories, with 8 other persons also receiving awards from the Sissala Rural Bank and Vision Farms.