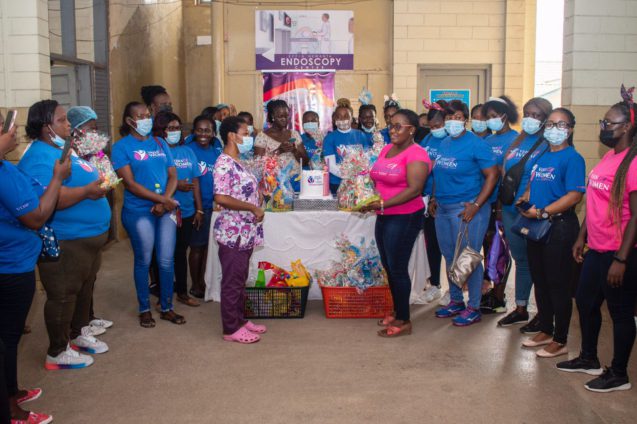 Western Region based women’s social group, Veils of Women (Gye Nyame Clan) has supported three health facilities in the region as part of its Yuletide activities.

The Effia-Nkwanta Regional Hospital in Takoradi, Apinto Hospital in Tarkwa and St. Martin’s de Porres Hospital in Eikwe at the Ellembelle district were the health facilities where some patients, especially women and children, benefited from donations consisting of assorted food items and drinks.

Cash donations were also made to settle the bills of female patients and children who had been discharged but could not afford to pay their bills.

The donation exercise forms part of a series of activities that the group is undertaking in line with its annual programme, under the theme “Support for the sick and vulnerable”.

The group in collaboration with its parent body, National Veils of Women, have been undertaking a number of activities in the year, culminating in the donation exercise at the three health centres.

Commenting on the rationale behind the gesture at a brief ceremony at the Effia Nkwanta Regional Hospital in Takoradi, the president of the group, Queen Akyereba Awah Baidoo said one of the key aims of the group is to come to the aid of the poor, needy and vulnerable in society and, therefore, found the Christmas period a perfect opportunity to demonstrate this.

“As a group, helping the poor and needy, especially women and children, is one of our main objectives. These items and cash donations have been mobilised to support our sisters and young ones who for one reason or the other are not able to afford these things even as they receive healthcare.

“We do this because we know the essence of social support for people like this and it is our prayer that this will go a long way to help their recovery and alleviate their burden,” Queen Akyereba remarked.

Receiving the items on behalf of the patients and the Hospital, Deputy Director of Nursing Services, Amor Yartey thanked the group for the gesture and highlighted the need for more institutions and organisations to support the vulnerable and needy especially in the provision of healthcare for these groups.