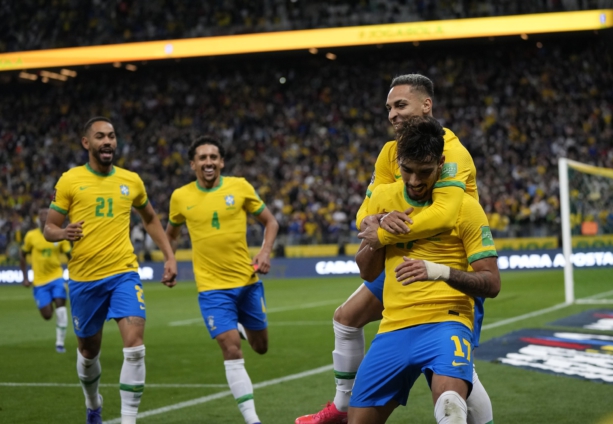 Brazil coach Tite did not produce the night’s smoothest dance moves but the sight of the sober-suited elder statesman gyrating with his players on the touchline epitomised this football carnival.

Tite cut an incongruous figure among his players but he simply could not resist joining a communal samba as Brazil put down the biggest marker at this World Cup with a dazzling victory against South Korea that sets up a quarter-final with Croatia on Friday.

And what a moment it was that inspired Tite, 61, to let it all hang out, as Brazil produced the tournament’s best football in a 4-1 win that had their status as World Cup favourites stamped right through it.

Richarlison had just made his second entry into the showreel for the greatest goals scored in Qatar, delivering Brazil’s third after only 29 minutes of a first half that will live long in the memory.

It was a marvel of pin-point passing around the edge of the area.

The Tottenham striker juggled the ball on his head three times and once with his foot, then laid it off to Marquinhos.

He delivered to Thiago Silva and his first-time pass slotted in Richarlison on the run to give the move the finish it deserved past South Korea keeper Kim Seung-gyu.

If Richarlison’s acrobatic bicycle kick against Serbia was magical, this may just have surpassed it with a glorious mixture of individual brilliance and passing perfection.

It was, like pretty much all of Brazil’s first-half football, poetry in motion. It said: “We are here. Can you stop us?”

All this and the return of Neymar, too.

Brazil could not be in better shape going into the last eight despite the loss of Gabriel Jesus and Alex Telles to injury.

Neymar was the headline act as he made his comeback after an ankle problem but he had to share top billing here with his attacking team-mates Richarlison and Vinicius Jr.

Vinicius showed his class when putting Brazil ahead after only seven minutes, and then Neymar got in the act from the spot – his ‘Riverdance’ footwork on his stuttering approach embellished the penalty. It leaves him one behind Pele’s all-time record of 77 goals for his country.

West Ham United’s Lucas Paqueta volleyed a sumptuous fourth from Vinicius’ cross before half-time, allowing Brazil from then on to preserve energy for Croatia.

Brazil have been easing their way into this World Cup, even losing to Cameroon in the group stage, but the first 45 minutes was an outstanding side on full power, sending a message to their rivals about what they would have to equal – at least – to win the trophy.

This was not simply a performance – it was an outpouring of Brazil joy. Football such as this is their national emblem.

It even allowed Brazil to give their outstanding goalkeeper Alisson 10 minutes off as Tite sent on third-choice Weverton to get in on the action. It meant Brazil became the first team to use all 26 players at this World Cup.

And it even allowed for dad dancing from their veteran coach, although the pre-rehearsed dance moves following goals went on so long that many observers questioned whether they amounted to a show of disrespect for their opponents.

The opposite view is that Brazil played with such freedom of expression, in the very finest traditions of their country, that their elation was purely natural.

Whether it was the corner flag or Tite, Brazil’s players were so locked into their own elation they were happy to take anything as a dance partner.

Neymar’s presence galvanised their early work, team-mates looking for the returning superstar. He got 81 minutes in the tank before he was replaced by Rodrygo.

Just to add to the impression that Brazil possess the strongest all-round squad in Qatar, Allison demonstrated why he is one of the world’s elite goalkeepers with a succession of fine saves as they eased off in the second half.

It is a daunting prospect for Croatia and anyone else they may meet out here. Brazil have the attacking firepower to beat anyone and if you do manage to get through at the other end, Liverpool’s outstanding goalkeeper presents a formidable barrier.

Brazil are into their eighth successive World Cup quarter-final and dedicated this performance to Pele, who is in hospital, as they paraded a giant banner at the final whistle bearing the 82-year-old’s name.

Pele will have appreciated the gesture and he would have undoubtedly nodded in approval at Brazil’s performance, the biggest statement by any country so far at this World Cup.

DISCLAIMER: The Views, Comments, Opinions, Contributions and Statements made by Readers and Contributors on this platform do not necessarily represent the views or policy of Multimedia Group Limited.
Tags:
Brazil
Neymar
Pele
Qatar 2022 World Cup