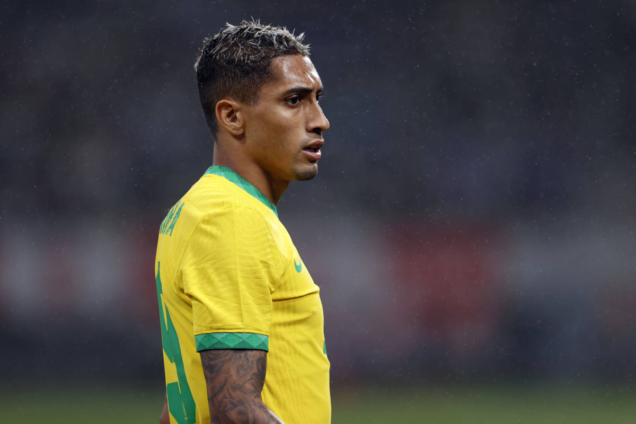 Barcelona's Raphinha, 25, is among a new generation of exciting Brazil talent

Brazil’s coaching staff were having a laugh before training when Neymar stopped by them and joked with manager Tite. “This bunch of kids that are coming,” he smiled. “It’s just nuts. They’re going to give you a headache.”

And he was not wrong – the rise of Raphinha, Vinicius Jr, Gabriel Martinelli, Antony and Rodrygo has totally changed the way the Selecao play and forced the 61-year-old to include all of them in his World Cup squad.

They have helped turn a pragmatic side lacking flair and grace, who couldn’t win the fans over, into one to have many in the country – arguably for the first time since 2006 – believing that winning the trophy for the sixth time is not only possible, but highly likely.

The Brazilians have rediscovered their attacking DNA. When in possession, they usually use a 2-3-5 formation that relies heavily on the wingers, not on the overlapping full-backs like in the past. However, that does not mean the defence is left too exposed – Alisson, Thiago Silva and co conceded only 19 goals in the 50 games before Qatar and have often looked impenetrable.

For most of the four-year cycle there was a feeling this side had not been properly tested, though. They had not taken on European opposition since a March 2019 friendly meeting with the Czech Republic, despite several attempts to arrange matches against the likes of England and Spain. It was the longest they had gone without facing a rival from Europe since the 1954 World Cup.

But now at the World Cup this is not a concern any more. It was Europe’s loss. The Selecao are ready, having qualified top of their group and with star man Neymar fit and available again for Monday’s second-round match against South Korea.

“Brazil are much more prepared now than they were in 2018 and 2014. Among other things, the ‘perninhas rapidas’ have taken some of the pressure off Neymar’s shoulders,” former international Grafite, who is working as a pundit, tells BBC Sport.

“Obviously, if we are to win in Qatar, we will need Neymar at his best, but we don’t depend solely on him any longer. Unlike in the past, we have great depth in all areas.

“Neymar is not alone in this team. If he passes to his right side, he will find Raphinha, for example, a boy who is very dangerous in one-on-one situations, can dribble and cut inside. It doesn’t matter where you look – defence, midfield and attack – the talent is everywhere.”

Except for a home defeat to Argentina in the 2021 Copa America final, Brazil barely experienced any turbulence on the road to Qatar. But despite the positive results, the five-time world champions initially struggled to convince on the pitch and get the fans on board.

That all changed after the second half of the 3-1 away victory against Venezuela in October 2021.

The Selecao were losing 1-0 at half-time when Tite decided to introduce Raphinha and hand him his international debut. The young winger, then of Leeds United, had a night to remember, setting up two goals and earning the penalty for the other one. Vini Jr and Antony were also given minutes and impressed in Caracas.

The following week Raphinha was in the starting XI, going on to put on a show in the 4-1 win over Uruguay, possibly the best performance from the Brazilians since Russia 2018.

From that moment on, there was no way back.

“I believe that the main contribution from Raphinha and these other young players so far has been the joy that they have brought back to the team,” says Grafite.

“We will not always be able to attack the other sides as we did in qualifiers, that’s clear, but I find it important that we can see our traditional offensive style once again there and identify with it.”

Of the 14 players used in the 2-1 defeat by Belgium that sent Brazil home in the quarter-finals of the last World Cup, only four of them remain in the squad – Alisson, Thiago Silva, Neymar and Jesus, who is now injured. Veteran footballers like Fernandinho, Marcelo and Filipe Luis were dropped along the way.

It’s a different team in Qatar, but the pressure is even greater than in 2018.

If Brazil don’t win the tournament this winter, they will at least equal the country’s longest ever run without lifting the World Cup trophy – the 24 years between 1970 and 1994.

None of the ‘perninhas rapidas’ were born when Romario inspired the South Americans to the title in the United States, but now it will be up to them to avoid the unwanted record and return home as champions.

“Brazil couldn’t have got to Qatar in a better form, but everything happens so fast in the World Cup, so that’s no guarantee of success,” Grafite continues.

“We have teams like England, France and Argentina who can win it, too. We will have to wait and see.”

DISCLAIMER: The Views, Comments, Opinions, Contributions and Statements made by Readers and Contributors on this platform do not necessarily represent the views or policy of Multimedia Group Limited.
Tags:
Brazil
Neymar
Qatar 2022 World Cup
World Cup 2022