World Cup 2022: Ghana aim for revenge against Uruguay for 2010 exit 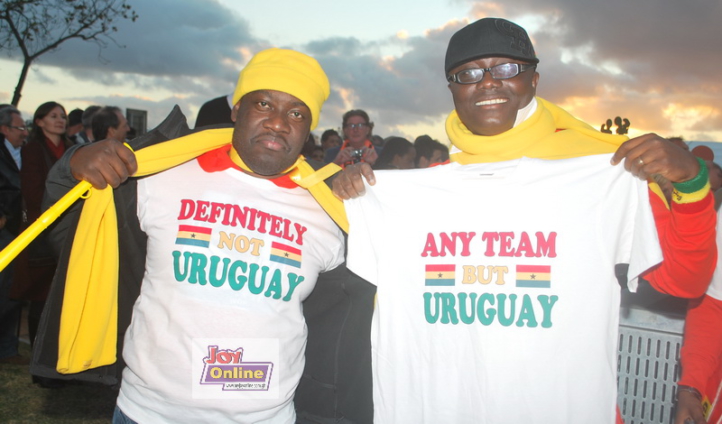 File photo: Dateline 2020, South Africa. Kojo Oppong Nkrumah and Bola Ray protest the 'raw deal' handed Ghana by Luiz Suarez and his Uruguay at the 2010 World Cup. For them and many other football fans, anything but Uruguay deserved to win the tournament.

In 2010, Ghana were the width of a crossbar away from becoming the first African team to reach the World Cup semi-finals.

Asamoah Gyan hit the woodwork with a penalty in the last minute of extra time after Uruguay’s Luis Suarez had been sent off for pushing the ball away with his hands on the goalline.

It meant the game ended 2-2 and Uruguay went on to win a dramatic shootout, which Suarez celebrated wildly.

The two teams meet again at 15:00 GMT on Friday. For Ghana, it is a long-awaited chance to get revenge. For Suarez, it prompted more questions.

This is a crucial match in Group H, with Ghana knowing victory will send them through and Uruguay needing victory to stand a chance of qualification.

The match 12 years ago was one of the most controversial in World Cup history and BBC World Service has produced a programme on what happened and how it will influence their meeting in the current World Cup.

“When the draw was made and they saw Uruguay in Ghana’s group, the only thing in people’s mind was revenge. Ghana wants revenge, it is motivation,” Gyan told the BBC.

“People all over the world know what happened. It is behind me, but I’m human and it’s in the back of my mind.

“We have South Korea, Portugal and Uruguay – and the most important game for Ghana is against Uruguay. It is in the back of everybody’s mind, going for revenge, revenge, revenge.

‘I don’t know how that penalty went high’
Gyan, who joined Sunderland after the 2010 World Cup in a then club-record £13m transfer, scored three goals in South Africa and Ghana were on the attack in the last minute of extra time as their thrilling 2010 quarter-final with Uruguay was tied at 2-2.

Suarez blatantly blocked Dominic Adiyiah’s header on the line with his hand and was promptly sent off – but Gyan could not take advantage as his penalty bounced off the bar. Suarez, watching on from the tunnel, wildly celebrated the miss.

The match went to a penalty shootout and Gyan scored Ghana’s first penalty, but Uruguay won 4-2 before losing to Netherlands in the semi-final.

“I scored a penalty in the first game, a very crucial one against Serbia and I scored against Australia through a penalty as well,” recalled Gyan, now 36 and without a club.

“I scored in extra time against America so the confidence level was that high. Against Uruguay when we had a penalty, although there was pressure, I was the most confident player in the world.

“I just needed to step up and shoot. Honestly I will say it was one of these days because my penalties do not go that high.

“I didn’t know how that penalty went high. I think it was a technical error or something.

“When we went to the penalty shootout I just wanted to prove a point. I had to step up and I scored – you have to come back and prove yourself.”

Ghana fans unable to forgive Suarez
Suarez, now 35, is in Uruguay’s World Cup squad but is still a hated figure in Ghana 12 years on.

Ghanaian sports broadcaster Juliet Bawuah said: “I’m yet to meet a Ghanaian football fan who is willing to forgive Suarez for that travesty of football justice.

“A lot of people think if the Black Stars had beaten Uruguay they would’ve gone to win that World Cup and given Africans something to hold on to for years.

“Any time Suarez was playing for Liverpool, if anything happened to him like an injury, he gets a yellow card, he gets sent off, he gets punished by the FA, then people were happy. No-one wants to hear his name.”

DISCLAIMER: The Views, Comments, Opinions, Contributions and Statements made by Readers and Contributors on this platform do not necessarily represent the views or policy of Multimedia Group Limited.
Tags:
Black Stars
Qatar 2022 World Cup
revenge
Uruguay