Wulugu-Kpasenkpe road construction halted after armed robbers attacked workers, made away with ¢300k 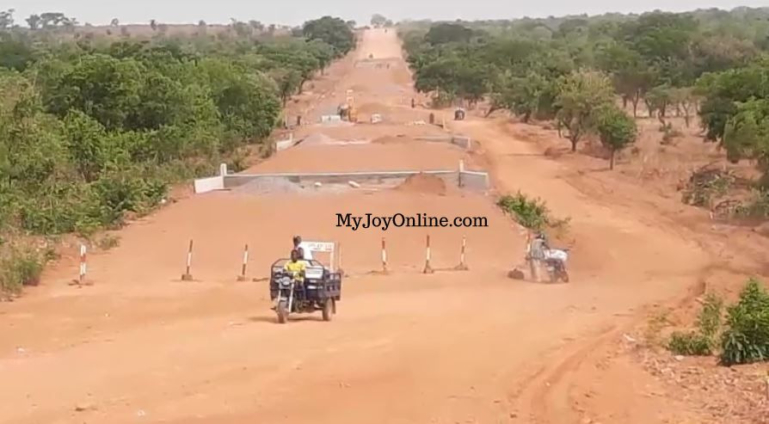 Road construction work at Wulugu–Kpasenkpe in the North East Region has come to halt after four armed robbers attacked workers of the construction company at their camp in Duu near Walewale and made away with ¢300,000 last Wednesday.

The 35km road is very significant as it links to the West Mamprosi municipality to the Mamprugu Muadugu district and further to the Upper West Region.

However, the City Ghana Construction Company workers who laid down their tools also withdrawn all heavy equipment from the site, leaving the road blocked with uncompleted bridges, heaps of sand and gravels.

The road construction also forms part of the municipal authorities efforts to enhance security and open up access to certain vital public services such as healthcare and education in the oversee communities.

Narrating the incident to JoyNews’ Eliasu Tanko at the camp of the workers, a cook who gave her name as Sekina Danjomah said the masked burglars came in two motorcycles and demanded money.

“I told them there is no money here, one of them slapped me and I threw a stone at him, he slapped me again and I responded same.”

According to her, one of the robbers attempted pulling out a gun, but she quickly held the rope of the gun and “we struggled for several minutes to a point I nearly disarmed him, then one of them hit me with a gun.”

The armed men, after the back and forth, went to the Chief Security of the company, Peter Osiam and said “they have come for the money, what money, they said the money.”

“If somebody is owing you in this company, maybe call that person and say let’s talk, [he had told them] but they said no, they were pushing me and I was also resisting so they also realized that I’m not giving them the chance to go,” he told JoyNews.

However, “they removed an AK47 [Gun] and pointed to me to move, then I said to where. They march me to the office, they ask the accountant, bring all the money,” he recalled.

It has been a mystery how the armed men gained access into the fenced camp after the long confrontation with the cook in front of the gate.

The Walewale Divisional Police Commander, DSP Cosmos Awey told JoyNews that the robbers made away with monies meant for workers salaries.

“I was told they were able to make away with ¢300,000 which was meant for workers. That day in question was supposed to be their payday and people had already queued to collect their payment when these people entered and took the money away.”

According to him, upon hearing the news, the police team scouted the whole area, “we did our best but we couldn’t get anybody then the next morning I asked them to come and make an official complaint which they did.”

DSP Awey said a team of police investigators were then dispatched together with a patrol team to the company to access what happened.

“On the ground, we retrieved 11 AK47 empty shells and one BBB cartridge. There are also bullet holes all over the place through air conditions, walls, doors, they just fired anyhow,” he noted.

He also indicated that there were, however, no casualty “and now an investigation is underway.”

DISCLAIMER: The Views, Comments, Opinions, Contributions and Statements made by Readers and Contributors on this platform do not necessarily represent the views or policy of Multimedia Group Limited.
Tags:
North East Region
Road Construction
Walewale
Wulugu-Kpasenkpe Road