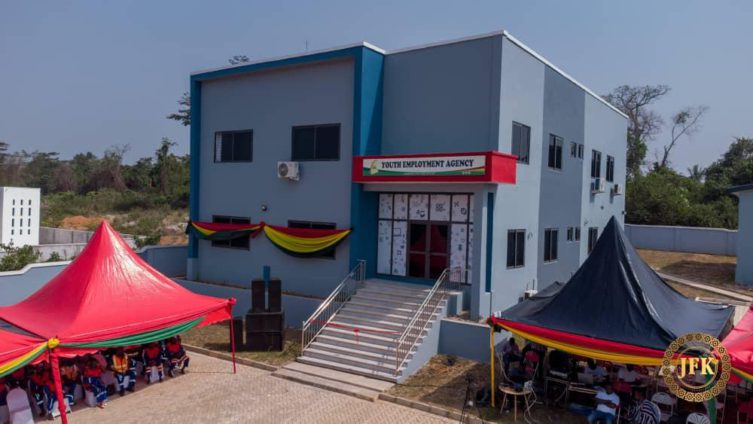 The CEO of the Youth Employment Agency has promised the people of the Western North Region several thousands of jobs in 2022 and the ensuing years, especially in the Areas of Agriculture, craft and Entrepreneurship in the Region.

Justin Kodua Frimpong made the statement when he was joined by the Board Chairperson of the Agency, paramount chiefs, Municipal and District Chief Executives in the Western North Region to commission a newly constructed Ultra-modern regional office complex last Friday to house the Regional Secretariat of Youth Employment Agency.

The Office Complex was borne out of the need to have a fully functional secretariat that will see to the creation, facilitation and the development of jobs and job opportunities tailored to the needs of the people in the Region.

It also serves the government vision of evenly spreading infrastructural development across the country especially in the newly created Regions.

Speaking at the event, the Chief Executive Officer was clear that the Youth Employment Agency is the fulcrum of the President’s One Million Jobs agenda vision and he as the CEO will make sure that this vision is fully realised through effective collaboration with institutions like the NEIP, Ghana Enterprises Agency, Forestry Commission, National Youth Authority and the MMDAs.

“We are going to make sure that in the coming year and the subsequent ones, the Agency’s steps in line with line with the vision of the President to boost infrastructure development and create at least one million jobs will be achieved through a deep collaboration with all Stakeholders.

“We are already in partnership with NEIP, Ghana Health Service, GEA (formerly NBSSI), Forestry Commission and even private partners that yielded in close to One Hundred and Fifty Thousand (150,000) Jobs over the last four years.”

Mr Justin Kodua hinted that with the setting up of this new ultra-modern office, particular focus will be set on the Western North Region in the coming years to create thousands of jobs to fit the structure’s purpose and gain value for the amount of money expended of the construction.

He stated that the Agency will maximise the efforts of its Artisan Directory in the Region to train young men and women to have professional craftsmen and women and help them to obtain jobs or create their own.

It will also bring artisans in the Region unto a single platform a pool to serve as an easy source for clients and to also boost the market size of participating artisans.

According to the CEO, Agriculture which thrives in the Region is an area of interest to the Agency and funds and training are being made available for potential beneficiaries in the coming months.

He stated that he will love to see farmers who mechanise and receive professional training and practices to double or quadruple their yields in the coming Farming Seasons.

Board Chairperson of the Youth Employment Agency, Anita Kusi Boateng was happy that the Region has received an edifice of international standard and urged both staff and all stakeholders to be motivated by the structure alone to give off their best in using, the Job Centre, Work Abroad, Artisan Directory, Flagship projects and the Entrepreneurship support to find decent jobs for the people of the Western North Region.

She emphasised the significance of the new policy initiatives and the traditional modules to the Governing board of the Agency and the will to will to create the highest possible number of jobs for the youth of Ghana.

Mrs Kusi Boateng hinted of more programs and modules to be rolled out in the short term including the Community Health Worker Program, processes of which has just begun.

She expressed delight at the performance of the predecessor Governing Board for being proactive and result-oriented towards the new policy initiatives of the Management for the transformation agenda being pursued, and promised to increase the tempo this time in support of the One Million Jobs Creation Agenda of the Government.

“The Board is happy to see the completion of these four Ultra-Modern Regional Offices in Western North, Oti, North East, and Ahafo, with the others progressing steadily,” the board chairperson said.

She assured that the Board will not allow the structures to be defunct but rather commit the Management and staff to the very core duty of implementing programs and projects to ensure sustainable jobs creation and also to inculcate maintenance culture in the Agency for the maintenance of these offices.

Stakeholders in the Region, including the Regional Coordinating Director who represented the Regional Minister, MDCEs, Chiefs, NGOs, other government Agencies took their turn to commend the Board and the Agency for this infrastructural development and the accompanying innovative policies that will obviously see to the massive reduction of unemployment in the Region.

They all promised to work together with the Regional Secretariat of the Agency to achieve the president’s primary focus of job creation.