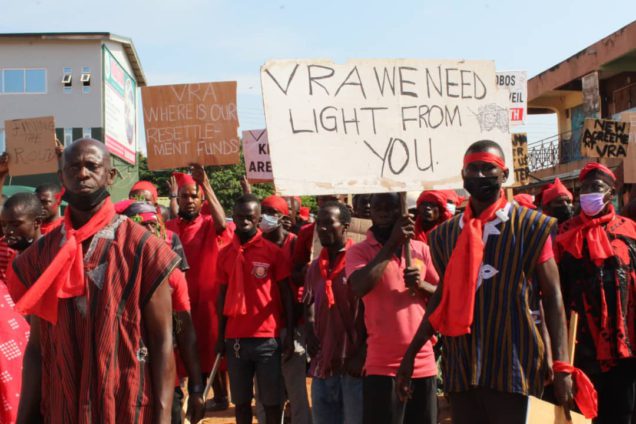 Aggrieved residents of Yilo and Manya Krobo municipalities of the Eastern region have hit the streets against plans by the Electricity Company of Ghana (ECG) to introduce prepaid meters in Somanya, Odumase, and its environs.

The protest led by the United Krobo Foundation, a youth group in the area, want the power distributor to halt its intended plans.

Over the years, residents of the two municipalities have kicked against what they claim to be huge electricity tariffs, accusing the ECG of deliberately attempting to short-change them.

At a press conference recently held in Odumase Krobo, the group said residents would no longer want to be ECG customers.

A leading member of the United Krobo Foundation, Teye Kwao Kassim, said the over billing situation negatively affected their livelihood.

“We have a problem with ECG, and that we are meeting Jaw jaw to solve the problem but quite recently, ECG said they are coming to fix prepaid meters. We, too we won’t allow that because the Kofi Afawu’s committee confirmed that 99 per cent of what we, the Krobo’s, are saying was right.

“Now they want to enter the towns with their prepaid meters, but we won’t agree. They held durbars in Somanya, Agormanya and Kpong that they are wrong with the over billing,” he explained.

As a result of the impasse, the residents are demanding a direct power supply from the Volta River Authority (VRA) instead of the Electricity Company of Ghana.

According to them, the Construction of Akosombo and Akuse Dams displaced their ancestors and deprived them of their livelihood but were not compensated; therefore, it is insensitive for VRA not to serve them with power as being done in other communities in the Asuogyaman District.

“The last resolution we passed is at the flagstaff house now. The last bill was ECG paper is ¢23,000 but went to ECG it changed ¢200. There’s a worker at VRA who was billed ¢45,000, but when they take the bill to ECG, it was ¢2,000. What about the person who doesn’t know anything. ECG is killing our people. ECG must go; VRA should take over,” he stated

The group had earlier demanded that the entire Krobo area access free power supply from Volta River Authority as part of their corporate social responsibility for taking their land for constructing the Kpong and Akuse Dams.