You can force us to the workplace but you can’t force us to work - GRNMA to NLC - MyJoyOnline.com 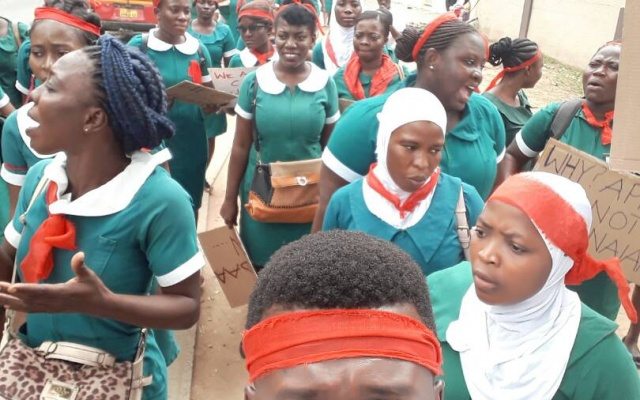 The Ghana Registered Nurses and Midwives Association (GRNMA) has said although the court has ordered them to return to work, the question as to whether the actual work at the facilities will be executed is up for debate.

This comes after an Accra High Court, for the second time, ordered the Association through a substituted service to halt its ongoing strike action.

Even though an initial interlocutory injunction was secured by the National Labour Commission (NLC) on Friday to compel the GRNMA to call off its industrial action, the nurses went ahead to effect a nationwide withdrawal of their services explaining that they did not receive a copy of the said court order.

Subsequently, the NLC has secured another application in support of motion ex-exparte for an order for substituted service, therefore, nurses are expected to stop the strike action with immediate effect.

However, reacting to this, the Association’s General Secretary, David Tenkorang-Twum in an interview on Joy FM’s NewsNite Tuesday accused the NLC of hiding behind the law to intimidate nurses and midwives.

This, he argued, is unacceptable since Associations are entitled by the constitution to carry out an industrial action when they feel displeased.

He then added, “What they don’t know, is that they can [use the law] to force us to the workplace but they can’t force us to work.”

“And we [the GRNMA] shall execute all other options that are opened to the Union,” he stressed.

Commenting on whether or not the Association is going to abide by the order of the court, Mr Tenkorang-Twum said since the Association’s leadership did not declare the strike various Councils have to be consulted before a decision is taken.