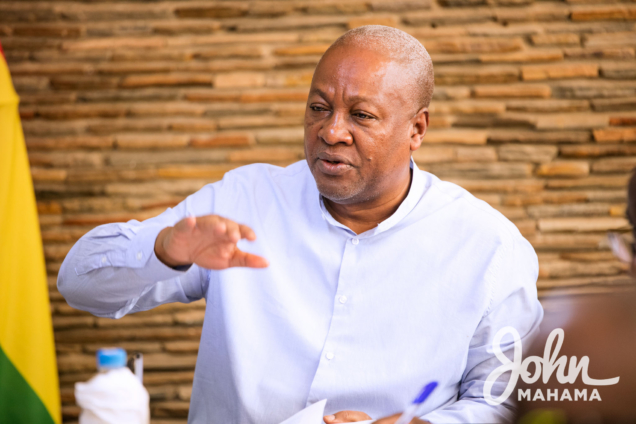 Former President John Mahama has responded to Attorney General, Godfred Yeboah Dame’s criticism of his comment about the judiciary.

The 2020 NDC flagbearer said he will not allow anyone to take his right to speak on issues of national importance from him.

According to him, as a former President, he is duty bound to comment on such matters to give them the needed attention.

Speaking in an interview with TV3 on Monday, September 12, he said he is unfazed by attacks from people who are unhappy with his criticisms.

“The Judiciary is the last arbiter. We can disagree, and we can have quarrels in Parliament eventually when we are unable to agree, we all go to the justice system and we must have confidence that it will do fairly and will do so according to the law and in the public interest that’s all I was saying.

“So how he can interpret that to mean that I was imprudent and bla bla bla. So if you are a former president and you see something going on in the country you have no right to talk about it? Is that what he is saying?

“No, I won’t let him take that right away from me. If I see something going wrong, I will point it out. It is my duty to do so,” he said.

The Attorney-General and Minister for Justice on Monday, September, 12 responded to former President John Mahama’s critique of the Judiciary.

He thus described Mr Mahama’s attitude as deplorable and unbecoming of a former Head of State.

“I am compelled to comment on the same in this address because they border on the security of the state and constitute a deliberate pattern of conduct aimed at undermining the independence of the Judiciary, an arm of government whose autonomy is crucial to its proper functioning.

“Such conduct is clearly deplorable, coming from one who has occupied the highest office of President and aspires again to that office.

“At this moment, it is important for all to note that I express this sentiment not because I stand in opposition to former President Mahama as a politician.

“My dismay is founded more on the fact that I am a lawyer and every lawyer ought to be concerned about these kinds of views expressed by a political leader in this country!,” he said at Ghana Bar Association’s Annual Conference on Monday.

The former President, speaking at the NDC’s Lawyers’ Conference on Sunday, August 28, said it will take a new Chief Justice to repair the “broken image” of the Judiciary.

The NDC’s 2020 Presidential Candidate however noted that the current Judiciary has become an item of ridicule and mistrust, and therefore the need for a new Chief Justice to restore public confidence in the courts.

DISCLAIMER: The Views, Comments, Opinions, Contributions and Statements made by Readers and Contributors on this platform do not necessarily represent the views or policy of Multimedia Group Limited.
Tags:
Chief Justice Anin-Yeboah
Dame
Judiciary
Mahama
NDC