You will never pass from the minds of men, but will live in their hearts – Martin Amidu eulogises Rawlings 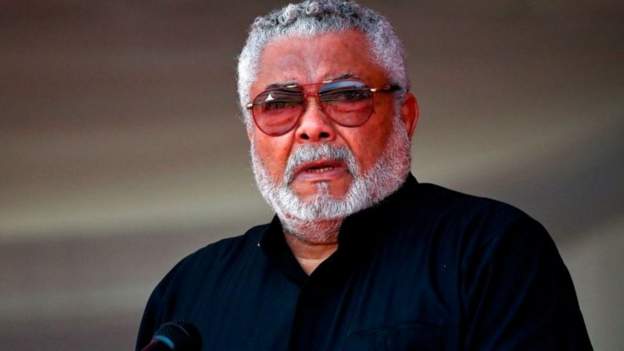 Former Special Prosecutor, Martin Amidu has described the late former President Jerry John Rawlings as a rare gem whose memories will not “pass from the minds of men” so long as Ghana endures.

He said this in a heartfelt tribute to the late statesman on the occasion of his burial, January 27, 2021.

“Comrade Rawlings, you are one of those rare gems of this land who will never pass from the minds of men, but will live in their hearts, so long as Ghana endures because of the great qualities of your life.”

He added that the leadership qualities exhibited by the former President throughout his time in office have earned him a notable position in the annals of political leaders on the African continent., and will make him remain “the most famous son of our homeland Ghana.”

“His indomitable courage, all pervasive-humanity, and love for freedom for every Ghanaian are the qualities of our Great Leader for two decades as a revolutionary leader, and constitutionally elected President under the 1992 Constitution he birthed that will forever make him to remain the most famous son of our homeland Ghana.”

Martin Amidu indicated that for the stellar qualities exhibited by former President Rawlings, members of various political leanings were willing to serve under him during his administration further amplifying the nation’s trust in his capabilities as a leader.

“He was the Head of State of 4 Governments which encompassed members of all the political persuasions of this country who were willing to serve under him and never was the nation’s trust in a man most amply justified.

“One such man who served under him as a matter of indisputable fact from an opposing political persuasion succeeded him immediately as President of Ghana on 7th January 2001. Historians in the future will analyze his strategy and tactics, and point, no doubt to his mistakes.”

He added that in his entire lifetime he is yet to come across an African leader who has fought for the Pan-African cause in a manner that the late former President did.

“But we who lived through those days and served under him have this advantage over the historians of the future: that we can testify to the inspiration we received from his splendid courage, integrity, high moral character, and his matchless charisma and eloquence.

“In the line of Ghanaian and African statesmen who have graced our political history in my adult life, none has rendered such incomparable service, not only to his country but to the Pan Africanist movement, the African liberation struggle, the African continent, in general, and the world at large,” he said.

DISCLAIMER: The Views, Comments, Opinions, Contributions and Statements made by Readers and Contributors on this platform do not necessarily represent the views or policy of Multimedia Group Limited.
Tags:
Martin Amidu
Rawlings