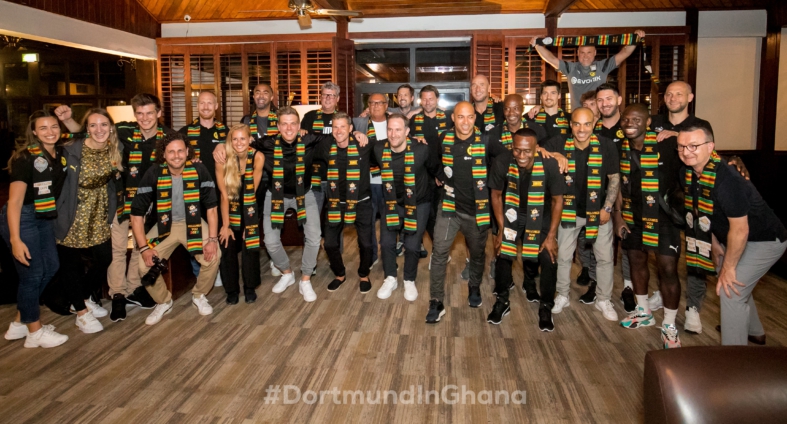 Young footballers in Ghana have been urged to make the most out of Borussia Dortmund’s Tour to Ghana.

Former players and officials of the club have been in Ghana as part of their partnership with Division Two side, Shooting Stars Football Club.

According to the Cheif Executive Officer of Shooting Stars, Randolf Rodrigues, the initiative to bring Borussia Dortmund to Ghana is a way to bring the club to the African continent as well as establish a long-term relationship with the German club that would see them set up an academy to train and develop the youth.

He also added that Dortmund got attracted to the Ghanaian club due to the discipline they possess.

“[There are two ideas behind this initiative] the short-term and the long-term. The short-term is being able to bring a team of Dortmund’s calibre to the continent,” he said in an interview with Joy Sports.

“In the long-term, we have ambitions to establish a much more sustainable initiative, like an academy where we can actually train and develop youth to give them the opportunity for exposure to the game in Europe. But now we are putting in place the building blocks to achieve that.

“I think it’s just discipline and hard work, and commitment to doing things the right way and that is one of the things that I think attracted Dortmund to the team.”

Former Dortmund and Nigerian international, Victor Ikpeba, cautioned the talented youngsters in Ghana to have discipline as well as desire and use this platform as an opportunity to become professionals.

“[They need to be] disciplined. You need to be passionate and get to your dreams as a young football player. Hard work, dedication, a little bit of education and the desire to succeed as a football player,” he told Joy Sports in an interview.

“If they finally want to be professional footballers, this [initiative] is the possibility. We are going to see them and you never know, some of the officials from Dortmund might see someone and say let’s take him to Dortmund. So it’s a big opportunity for the young boys.

“I’m happy they found time to come [because] they don’t do this. This is the first time so that shows they want to engage in Africa.”

On the part of Dortmund, former goalkeeper, Roman Weidenfeller, reiterated that the initiative could serve as a big opportunity for young talents in Ghana to play in Europe.

“I think this is a good project and the most important thing is for the players to have a lot of discipline. So if you want to come to Germany, you need to work hard and this maybe is a chance to come to Europe and play as a professional player,” he said.

The Borussia Dortmund Legends are expected to take on the African Giants at the Accra Sports Stadium on Saturday, June 11.