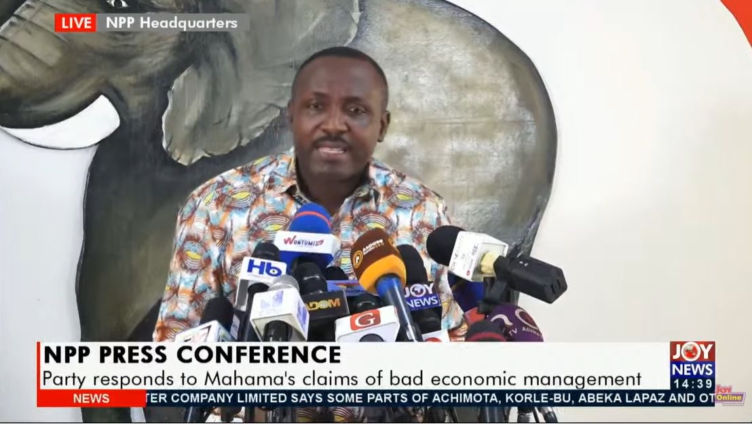 The New Patriotic Party (NPP) has advised former President John Mahama to stop lying to Ghanaians about his record while in power, because “the facts show otherwise.”

Reacting to Mr. Mahama’s recent assertion that President Akufo-Addo is hiding behind Covid-19 to overspend, the General Secretary of the NPP, John Boadu, said the 2020 flagbearer of the National Democratic Congress (NDC) is out of touch with post-Covid-19 governance.

“Much as John Mahama seeks re-election on a campaign platform of ‘going back’ to the IMF, he attempts to confuse history by painting a rosy picture of his disastrous management of the Ghanaian economy between 2012 and 2016.”

“Indeed, he put the economy in freefall after extremely reckless expenditure in excess of some GHS12 billion in pursuit of election victory in 2012. His economy, under Seth Terkper, never recovered, leading to unheard of taxation measures on condoms and cutlasses,” Mr Boadu said.

He added that John Mahama’s period of economic mismanagement was marked by rising inflation and downward growth, with growth declining steeply from 14% in 2011 to 3.9% in 2016.

“This steep decline was in normal ‘bust and boom’ times, according to John Mahama. The worst economic crisis former President Mahama ever faced was falling commodity prices, which according to his boom and bust analysis, is normal for every administration. Yet, he could not manage to keep the economy on an even keel,” he said

On Covid-19, Mr Boadu said, Mr Mahama does not understand that all economic modelling worldwide is premised now on Covid-19 and the ability to preserve lives and livelihoods.

“Moreover, the Akufo-Addo administration has faced the worst ever international crisis in Covid-19, a scourge that has depreciated the worldwide economy and driven debt up generally. John Mahama’s lack of understanding of the Covid-19 economy is positively dangerous for Ghana, because it badly skews his feeble attempts at analysis of our current economic situation,” he added.

He also questioned the relevance of the Covid-19 advisory team the NDC put together adding that the former President has not proffered any solutions to the problems he mentioned.

“For the information of former President Mahama, COVID-19 is not only a matter of health. It has fundamentally become an economic imperative. In that light, what would Mahama have done differently? What and where are his alternatives? Alternative financial plan and alternative Covid-19 management plan? He has no plan because he does not realise and accept that Covid-19 has a fundamental impact on the economy,” Mr Boadu said.

DISCLAIMER: The Views, Comments, Opinions, Contributions and Statements made by Readers and Contributors on this platform do not necessarily represent the views or policy of Multimedia Group Limited.
Tags:
John Boadu
John Mahama
NPP