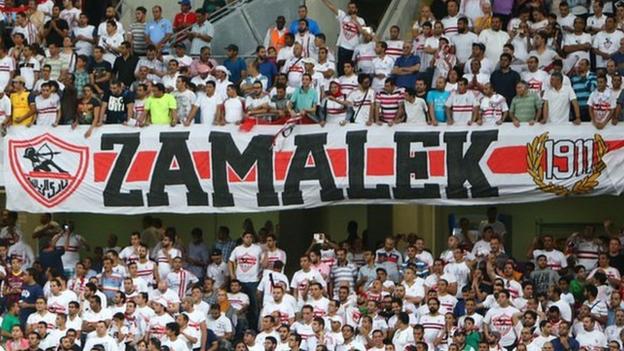 Egyptian giants Zamalek have lifted their 13th league title after beating Entag El-Harby 3-0 in the penultimate game of the season.

It took Zamalek only six minutes to open the scoring through Ahmed Sayed Zizo, marking his ninth league goal this season. Shikabala played a through ball to Achraf Bencharki inside the penalty area, the latter then played the ball back to Zizo who placed it in the back of the net.

Shikabala once again played a great ball behind the Entag defense but Bencharki’s lob was to powerful and went over the bar.

Three minutes before the half-time whistle, center back Mahmoud Hamdy El-Wensh took a powerful header but his effort went wide.

Zizo nearly doubled the score in the 52nd minute but his close range effort grazed El-Ghandour’s right post. Two minutes later, Entag had their first clear cut chance of the game through Hassan Yassin but his long range shot was easily caught by Mohamed Abogabal.

Shikabala and Zizo proved to once again the main source of danger for the White Knights after exchanging passes inside the penalty are but the latter skied his shot, in the 67th minute.

Bencharki sealed the deal in the 88th minute after Hamza Mathoulthi found Bencharki inside the penalty area who headed it past El-Ghandour and scored his 14th goal of the season.

Only six players from that squad are still among the Whites’ ranks which are: Mahmoud Gennesh, Mohamed Abogabal, Mohamed Abdelshafy, Tarek Hamed, Ayman Hefny and Youssef Obama.

DISCLAIMER: The Views, Comments, Opinions, Contributions and Statements made by Readers and Contributors on this platform do not necessarily represent the views or policy of Multimedia Group Limited.
Tags:
zamalek