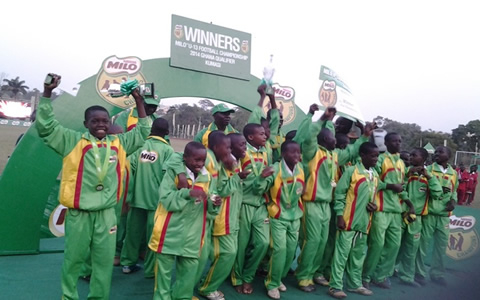 The three-day event which was held at the Paa Joe Park at Kwame Nkrumah University of Science and Technology (KNUST) saw ten schools drawn from the ten regions of Ghana battle for supremacy for the ultimate prize of representing Ghana in the African Championship in Nairobi Kenya later in the year.

Speakers at the event congratulated Nestle Ghana Limited through its brand Milo for their continuous support for grass root soccer in Ghana. In his speech, Stephen Appiahthe brand ambassador for the Championship said “the game is transforming and there is no way you can break the barriers of modern football if you don’t aspire to get some appreciable level of education. You need to take seriously your books and make sure you do not let playing football affect your education in any way”.

Appiah who is expected to hold a football clinic for the kids before they enplane to Kenya to represent Ghana in the African Championship admonished the kids to be disciplined since the game requires a lot of discipline.

He said “to make it to the top, you need to discipline yourself not only on the field but anywhere you find yourself. To win, you must always play fairly according to the spirit and letter of the rules, stay calm under difficult conditions, support and encourage your teammates at all times, play as hard as you can in practice and in games, show respect to your coaches, referees, and your opponents whether win or lose and last but not the least drink a lot of Milo".

Zogbeli by this success has replicated the performance of their predecessors SOS Primary School also from Tamale who won the last event.