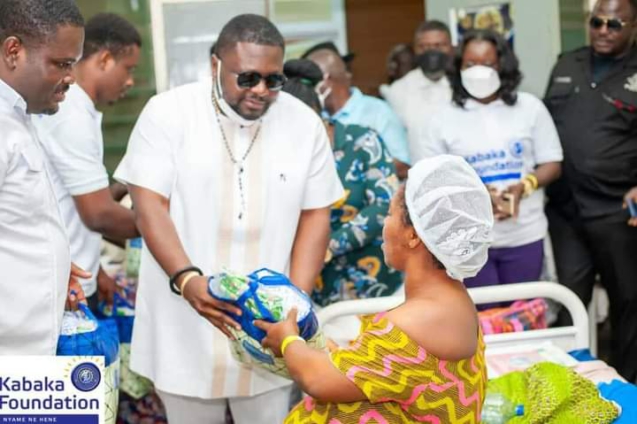 There was joy written all over the faces of mothers and their babies at the Neonatal Intensive Care Unit (NICU) of the Eastern Regional Hospital, Koforidua when a philanthropist came to their rescue by footing their medical bills.

The philanthropist, who is the founder and chairman of the Kabaka Foundation, came to the aid of the patients after management of the hospital made a passionate appeal to him.

The presentation of the cash amount of GH¢17,000 also coincided with his birthday.

“I decided to offer this support because this was where I was born in Koforidua. When the management of the hospital contacted me, I decided to come here with my team to support our mothers and their babies. I feel disheartened when I hear people are unable to pay their hospital bills because of lack of money. Health is a basic necessity which needs not to be joked with,” Nana Owiredu Wadie known in private life as Mr. Richard Nana Kwasi Wadie explained.

Through the foundation, Nana Owiredu Wadie who is the development chief of Kwahu Nkwatia also donated large quantities of soaps, detergents, milo, baby diapers, soft drinks, bottled water, among others, to the hospital to take care of patients, particularly pregnant and nursing mothers.

The Executive Director of the Foundation, Henry Larbi, said the gesture forms part of the foundation’s aim to reduce maternal mortality to meet the Sustainable Development Goals.

The foundation is constructing a one-storey ultra-modern Neonatal Intensive Care Unit, NICU, at a cost of GHC1.9 million for the hospital.

The Medical Director of the Eastern Regional Hospital, Dr Arko Akoto-Ampaw noted that the hospital for some years now always looked forward to receiving generously from the Founder of the Kabaka Foundation.

He urged others to emulate his kind gesture.

DISCLAIMER: The Views, Comments, Opinions, Contributions and Statements made by Readers and Contributors on this platform do not necessarily represent the views or policy of Multimedia Group Limited.
Tags:
Eastern Regional Hospital
Kabaka Foundation