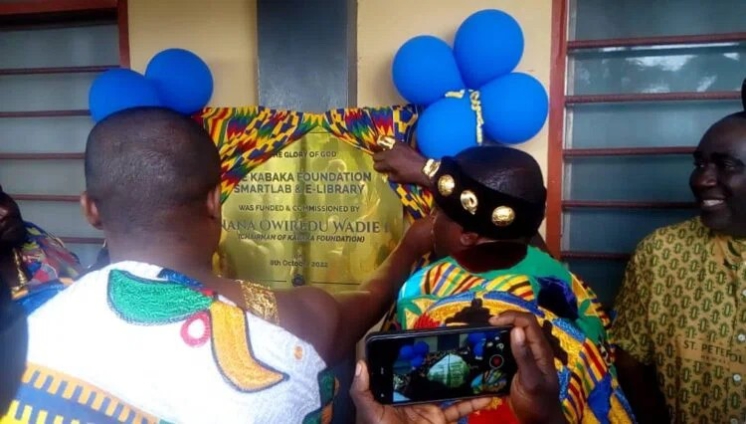 A Smart laboratory and an Electronic-Library initiated to boost education have been commissioned for the St. Peter’s Senior High School at Kwahu-Abetifi in the Eastern region.

The $52,000 project which commenced early this year will go a long way to unlocking the difficulties students go through especially in ICT education.

The unveiling coincided with the 65th anniversary of the St. Peter’s Senior High School at Kwahu-Nkwatia in the Eastern region.

The two projects were fully funded by the Board chairman of the school, Nana Owiredu Wadie I, who is also the development chief of the area, through his non-profit organization, the Kabaka Foundation.

The E-Libray and the Smart laboratory will go a long way to add value to education and better the economy. The Executive Director of the foundation, Dr. Henry Larbi said.

“We are now in the industrial revolution whereby there’s a new way to use artificial intelligence and to use robotics in solving issues and developing countries and economies. So these students are going to have access to this artificial intelligence and any other point that you’d need in the future because we don’t need these public services anymore but students need to be innovative so this is going to allow them to be innovative”.

Guest Speaker for the 65th anniversary, Daasebre Nana Kwaku Boateng III, the paramount chief of the New Juaben Traditional area commended school authorities for holding high the name of the school over the years.

“On this day, I will like to congratulate the stakeholders for making the school progress thus far. My special appreciation goes to the past and present board members, headmaster, teaching and non-teaching staff, for without your dedication, commitment, selflessness and initiative, this school would not have maintained its high level of discipline and academic success. You have worked tirelessly in carving an enviable name for the school that needs to be appreciated and maintained,” he stated.

The school’s Board chairman, Nana Owiredu Wadie I, called for a sustainable support from stakeholders in the development of the school in the face of the new industrial revolution.

DISCLAIMER: The Views, Comments, Opinions, Contributions and Statements made by Readers and Contributors on this platform do not necessarily represent the views or policy of Multimedia Group Limited.
Tags:
Kabaka Foundation
St Peter’s SHS