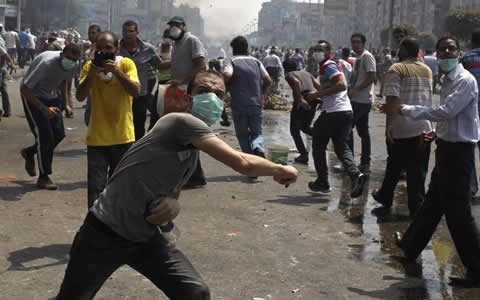 The Egyptian Football Association (EFA) insists there is no reason for second leg of World Cup the playoff against Ghana to be played outside Egypt due to security concerns.

This comes after the Ghana Football Association (GFA) asked FIFA on Monday to switch the second-leg of their 2014 World Cup playoff against Egypt to “a safer place.”

The match between the two sides has been scheduled for Cairo on November even though the turmoil in the country is escalating.

Spectators have been banned from football stadiums since February 2012 when more than 70 fans died in Port Said during clashes between rival supporters.

Two weeks ago a fan of Cairo club Zamalek was killed during clashes with security forces outside the club’s headquarters.

The security situation became worse when more than 50 Morsi supporters died and hundreds were injured in clashes with security forces around Tahrir Square on Sunday.

This prompted the GFA to ask FIFA to switch the venue for the match but the EFA insists they will host the match in Cairo.

“The second leg match will be held in Cairo on 19 November and this is final. The security authorities will provide heavy security for the game,” EFA spokesman Azmy Megahed told Ahram Online on Tuesday.

“We are in communication with the governing body of football to explain the matter and Hani Abou-Rida [FIFA executive committee member] is currently making great efforts to solve the problem,” Megahed added.

“These claims are unfounded and we reject all demands to play the game outside Egypt. We are capable of securing any game, not just the Ghana one. Ahly and Zamalek have been playing their games in the African Champions League in Egypt without any problems,” EFA president Gamal Allam said on Monday.

Success in organising the match at Cairo stadium means a lot to the authorities, and qualification for the first World Cup since 1990 could be marketed politically too. Ghana “sympathise” but they too have their own ambitions.

Egypt, who cancelled two successive premier league seasons due to crowd violence, has been in turmoil since the army ousted elected president Mohamed Morsi on 3 July following mass protests against his rule.

The Pharaohs will fly to Kumasi this weekend to meet the Black Stars in the first leg on 15 October.