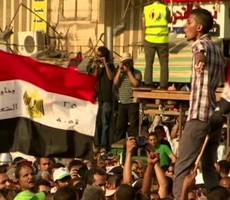 Egyptian FA officials are adamant that the World Cup qualifying playoff return leg will be staged in Cairo despite Ghana's request to FIFA to switch the game to a neutral venue.

The Ghana FA called on FIFA to hold the second leg – which is to be played in the presence of fans – outside Egypt after bloody political clashes had erupted in the North African nation during the past couple of days.

The Egyptian FA, however, seems positive that the decisive fixture will be held in Cairo on November 19 as initially planned.

"The second leg match will be held in Cairo on 19 November and this is final. Authorities promised to provide heavy security for the game," EFA spokesman Azmy Megahed told Ahram Online.

"We are in communication with the governing body of football (FIFA) to explain the matter and Hani Abou-Rida [FIFA executive committee member] is currently making great efforts to solve the problem.

In the same manner, Egyptian FA president Gamal Allam rejects the notion that the Ghana clash will be threatened by insecurity.

"These claims are unfounded and we reject all demands to play the game outside Egypt. We are capable of securing any game, not just the Ghana one," Allam said.

"Ahli and Zamalek have been playing their games in the African Champions League in Egypt without any problems."