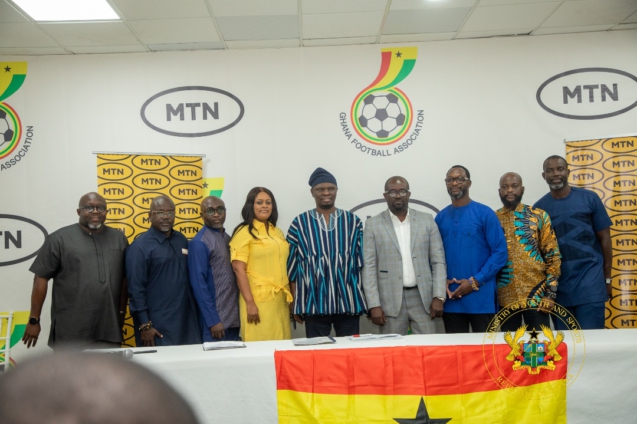 The Ghana Football Association (GFA) has announced MTN Ghana as the headline sponsor for the Black Stars ahead 2022 FIFA World Cup to be staged in Qatar.

The event to officially unveil the telecommunication company happened on Thursday, November 3, at the GFA Secretariat.

Selorm Adadevoh, the CEO of MTN Ghana, announced during a brief ceremony that the President of Ghana, Nana Addo Dankwa Akufo-Addo, was key in sealing the $2 million sponsorship deal.

“Today was made possible, starting by a meeting with the Group President and CEO Ralph Mupita, our Senior Vice President for Market, Mr Ebenezer Asante and H. E. the President, to discuss the sponsorship that we celebrate today,” he said.

During his trip to New York for the 77th UNGA in September, H. E. Nana Addo Dankwa Akufo-Addo had a courtesy visit from the MTN Group delegation at his hotel. Akufo-Addo urged the delegation of the group to assist the SBlack Stars’ World Cup preparations during their meeting with him.

In his address, Hon. Mustapha Ussif, Minister of Youth and Sports, acknowledged MTN’s contribution to sports development and thanked them for investing in sports.

He also added, “as the sector Minister, I can assure you that my Ministry is the custodian of every penny for the National teams, and just like every other corporate support we continue to receive, the funds will be used judiciously.”

The FA President, Kurt Edwin Simon Okraku, recognised MTN as the Association’s longest-standing partner. He praised the network provider for the numerous partnerships the association has had with them.

DISCLAIMER: The Views, Comments, Opinions, Contributions and Statements made by Readers and Contributors on this platform do not necessarily represent the views or policy of Multimedia Group Limited.
Tags:
Black Stars
GFA
MTN
World Cup