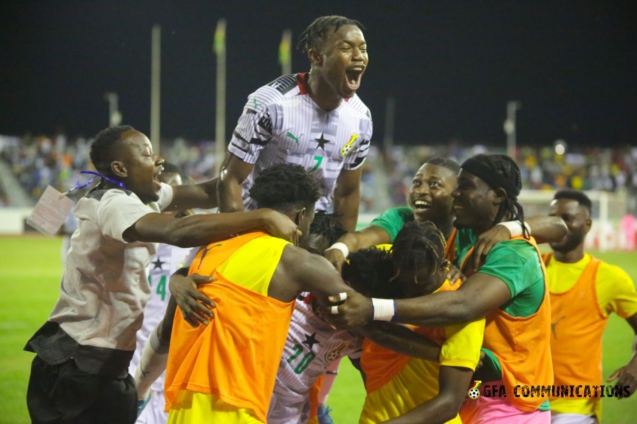 The Black Stars of Ghana got the 2023 Africa Cup of Nations qualifying campaign to a good start with a convincing win over Madagascar on Wednesday, June 1.

Felix Afena-Gyan and Osman Bukari scored their debut goals for the Black Stars while Mohammed Kudus was also on the scoresheet as Ghana recorded a 3-0 at the Cape Coast Stadium.

Having watched Angola beat Central African Republic with a 2-1 win earlier in the day in the other Group E encounter, Otto Addo and his charges were bent on gaining all three points and putting an end to a run of six games without a win.

Ghana started the game on a stronger foot with ll chances coming their way but the Black Stars were unable to make those opportunities count in the opening 45 minutes.

However, back from recess, the home team played with much purpose and hunger as they put three past the Bareas.

Kudus opened the scoring in the 53rd minute of the game slotting the ball into the net after being found by Afena-Gyan.

Three minutes later, the AS Roma forward netted his maiden goal for the Black Stars, this time finishing off from a pass from Gideon Mensah.

With just four minutes to go until the full-time whistle, Bukari rounded off the Madagascar goalkeeper before making it 3-0 after being on the end of Kudus’ mishit pass.

Antoine Semenyo made his debut for the Black Stars as he replaced Afena-Gyan for the last 15 minutes of the game.

The result against Madagascar sees Otto Addo record his first win as the head coach of the national team.