25 killed as bus plunges into gorge in India 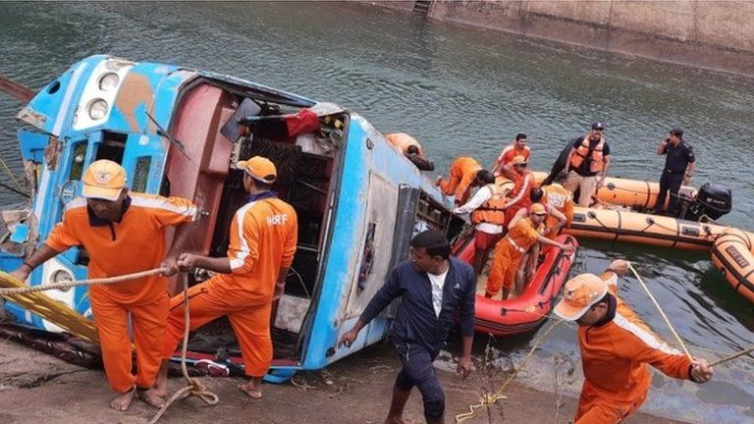 At least 25 people have died after a bus plunged into a gorge in the northern Indian state of Uttarakhand.

Officials said at least 40 were on board when the bus veered off the road and fell into a ravine in Pauri Garhwal district on Tuesday night.

So far, 21 passengers have been rescued following an overnight operation led by the state’s disaster response force.

Prime Minister Narendra Modi tweeted that his “thoughts are with the bereaved families”.

The bus was carrying a wedding procession from Laldhang to Bironkhal village in Uttarakhand when the accident happened.

The cause of the crash was not immediately known, but state authorities said they were investigating the incident.

Pictures from the scene showed the mangled remains of the bus lying near a steep hill as rescue personnel helped pull out the survivors.

Uttarkhand’s Chief Minister Pushkar Singh Dhami said that all possible help was being provided to the rescue teams to aid their efforts.

Road safety is notoriously bad in India, with more than 100,000 dying each year in crashes due to poor driving and dilapidated roads.

Buses are a popular mode of transport in India, especially in smaller towns. But operators often flout safety rules and pack them beyond their capacity.

DISCLAIMER: The Views, Comments, Opinions, Contributions and Statements made by Readers and Contributors on this platform do not necessarily represent the views or policy of Multimedia Group Limited.
Tags:
Bus accident
India