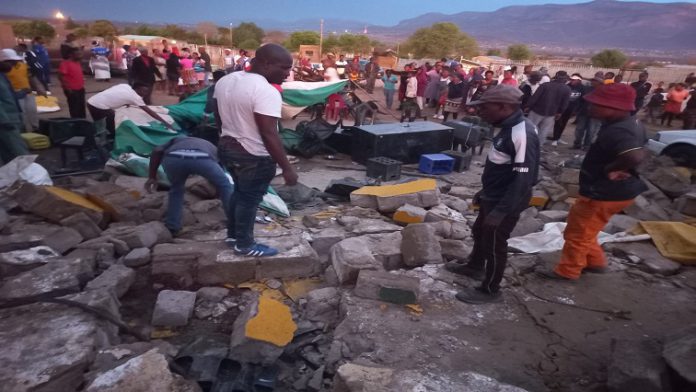 Four people have been confirmed dead after a wall collapsed on guests during payment of bride price ceremony (lobola) in GaChuene Thokgwaneng, South Africa on Saturday, October 4.

It was gathered that people attending the ceremony were seated in a tent which was positioned next to an unroofed building when strong wind blew.

The wall collapsed, killing three instantly and injuring several others. One of the injured later died in a hospital.

Family spokesperson and brother to the bride, Phinias Yika said “As the Yika family, we are still in shock about what happened on Saturday. It was supposed to be a celebration day as they were paying a bride price for my sister … it was a lobola negotiation ceremony.”

He said the incident happened quickly, noting that the wind started picking up around 5:00 pm. The bride and her in-laws had already left when the incident occurred.

He added: “It was 1.5m or 2m away from the wall. The wind was so strong and collapsed the wall. It fell on top of the tent while people were inside. It happened so fast. After a few minutes, there was dust and we couldn’t see what happened, but we knew that there were people inside [the tent].

“After getting a clear view of what happened, that was when we saw that there were people trapped inside and we tried to remove them.

“For the lobola negotiations, we finished early, at about 12:00 pm to 1:00 pm. The in-laws said they were going to fetch their bride at about 5:00 pm. Immediately after they left, the disaster started. They had already left with their bride and most people had left to accompany the bride.

“The few who were remaining and were involved in the incident were the ones who were left behind.”

He said the couple was still traumatised by the incident, especially the bride-to-be.

He also revealed that it was not uncommon for roads in the area to be damaged and roofs blown away during windy and rainy weather.

DISCLAIMER: The Views, Comments, Opinions, Contributions and Statements made by Readers and Contributors on this platform do not necessarily represent the views or policy of Multimedia Group Limited.
Tags:
Engagement ceremony
South Africa