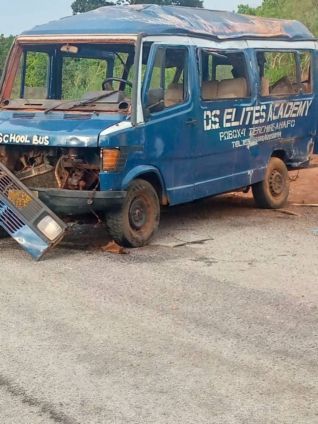 Four school children are reportedly dead and scores of pupils injured in an accident involving a school bus on the Terchire-Adrobaa stretch in the Tano North district of the Bono Region.

The old Benz school car with registration number AW 6315-11 was transporting about 25 pupils of the DS Elite Academy when the car slid off the newly constructed Adrobaa road.

Eyewitnesses narrated that the driver slid off the slippery road upon getting to a sharp curve, causing the car to somersault.

Three of the pupils died on the spot while another was pronounced dead at the hospital shortly after. Four other pupils are in critical conditions while the remaining sustained various degrees of injury.

The victims were transported to the St John’s Hospital at Duayaw-Nkwanta and the remaining at Adrobaa health center.

The four with life threatening injuries have been referred to the Komfo Anokye Teaching Hospital.

A teacher, who spoke on the matter, indicated that in their 15 years of operation, such an incident has never been recorded by the school.

Other residents also explained the Adrobaa-Terchire newly constructed stretch is an accident-prone area, adding that about four fatal accidents have been recorded in the past weeks.

DISCLAIMER: The Views, Comments, Opinions, Contributions and Statements made by Readers and Contributors on this platform do not necessarily represent the views or policy of Multimedia Group Limited.
Tags:
Children dead
Road Accident