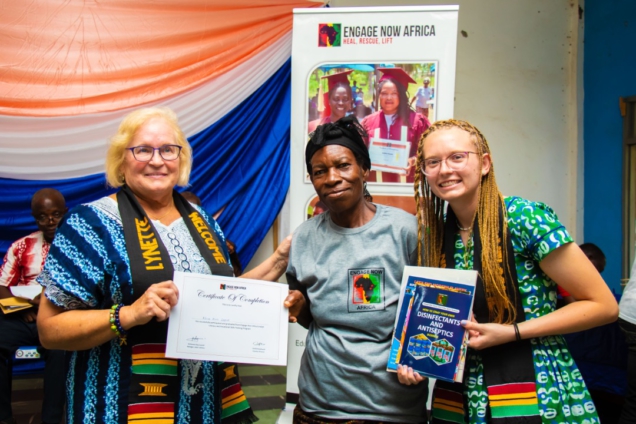 Sixty-two adult learners in the Central Tongu District of the Volta Region have graduated from an educational and capacity-building programme by US-based NGO, Engage Now Africa.

Founder of the organisation, Dr Lynette Gay said there is the need for everyone to be given the opportunity to learn how to read and write.

She noted that having the opportunity to be educated would enable the beneficiaries to contribute meaningfully to the development of their families and the nation as a whole.

In her submission, she urged residents, especially community leaders to identify persons interested in upgrading themselves academically, to enroll in the adult literacy schools to help them in the future.

Country Director of Engage Now Africa, Mrs Cecilia Amankwah said the organization has been in Ghana since 2006, as well as five other African countries; with a focus on ‘healing, rescuing and lifting the underprivileged’.

She said the organisation has subsequently trained over 4,000 learners across the country; with many now operating their own businesses; and others employed in other organisations.

Volta Regional Director of the Organisation, Francis Wama noted that learners, especially the youths who could not access formal education could become self-reliant if they are serious with the opportunity offered them to learn; adding that the organisation currently operates in seven districts in the Volta Region.

Some of the beneficiaries expressed gratitude to the organisers for the opportunity to be trained and equipped.