A flimsy excuse should not be given for denial of a visa to MPs - Sam George calls out Netherlands Ambassador - MyJoyOnline.com 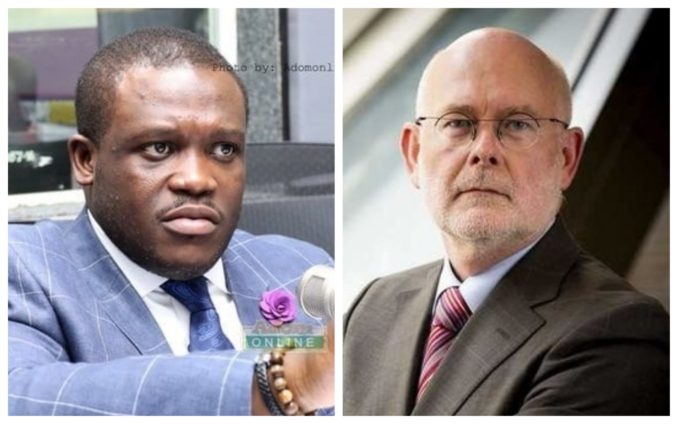 Member of Parliament for Ningo-Prampram, Sam Nartey George on Monday called out the Netherlands Ambassador to Ghana, Verheul Jeroen over the refusal of visas to some legislators.

Earlier, the Tamale North MP, Alhassan Suhuyini had alleged that the embassy declined his visa application on the suspicion of his support for the controversial Anti-LGBTQI+ bill currently in Parliament.

“For the Netherlands to ignore my status as an MP with the responsibility to an entire constituency, which was known to them…my valid travel visas to the UK and USA and my numerous previous travel records, which indicate I have never overstayed any visit abroad…my beautiful family, and deny me an entry visa on the basis that, there was insufficient evidence…that I have significant social or economic ties to my country to prompt my return after my intended visit, could only have been deliberately taken to provoke me and also undermine Ghanaian state officials and diplomats,” he said in a Facebook post.

In reaction to concerns that have arisen from the issue, Netherlands Ambassador to Ghana, Verheul Jeroen in a tweet blamed the lack of direct communication on the part of the applicant, Mr Suhuyini.

According to him, the controversy would have been avoided if the applicant had communicated directly with the embassy instead of the media.

Again, he stressed that it is because of such anomalies that countries have to establish diplomatic relations and bilateral embassies.

If the visa applicant only spoke to us directly, instead of through the media, we could avoid a lot of misunderstandings and miscommunication in the (social) media. That’s why it is important to have diplomatic relations and bilateral embassies. https://t.co/DbiHRlTlGJ

“If the visa applicant only spoke to us directly, instead of through the media, we could avoid a lot of misunderstandings and miscommunication in the (social) media. That’s why it is important to have diplomatic relations and bilateral embassies,” Mr Joroen posted on Twitter.

But Sam Nartey George in a rebuttal, hinted that the embassy failed to check the background of Mr Suhuyini, thus provided the “flimsy excuse of lack of social ties.”

He further stated that “Respect must be mutual and reciprocal. The choice of route is yours Sir. Choose wisely. Cheers.”

If the Embassy had also just checked the background of the applicant, the flimsy excuse of lack of social ties would not have been given as a reason to deny the visa. Respect MUST be mutual and reciprocal. The choice of route is yours Sir. Choose wisely. Cheers. 🦁 https://t.co/YQ3S7OswMj

The Ningo-Prampram MP ended his submission with a lion emoji to represent “Dzata” a nickname he has earned.

Meanwhile, the Minority in Parliament has begun auditing its members who have been denied visas by some embassies in the country.

This audit seeks to establish whether the denial is linked to their stance on the proposed Promotion of Proper Human Sexual Rights and Ghanaian Family Values 2021 Bill, otherwise known as the anti-LGBTQ+ Bill.

According to the Minority, the customs and practices of Ghana’s society frown on same-sex-related activities, hence they are in full support of the Anti-LGBTQ Bill.

“It is a moral imperative that the Parliament of Ghana stands together in fighting the introduction of those rights as it will erode the respectability of our societal moral fabrics, our cultural values and more importantly to encourage the courageous MPs led by Sam and his colleagues and to all those who share that value,” Minority Leader Haruna Iddrisu said.

Sam George and the LGBTQI+ Conversation

In July this year, Sam George confronted former Member of European Parliament for London, Seb Dance over the passage of the Promotion of Proper Human Sexual Rights and Ghanaian Family Values 2021 Bill.

Mr. Nartey George who has always opposed the legalisation of same-sex relationships in Ghana since the LGBTQI+ headquarters in Accra was shut down, took it upon himself to react to some submissions made by Mr Dance on his Twitter platform on July 23.

According to the former London MP, the drafters of the bill are building on retrogressive colonial legacies that seek to treat the lives of Ghanaians in an appalling manner, hence urging them to come back to their senses.

But his comment was not taken lightly by Mr Nartey George who in a rebuttal, admonished Mr Dance to be rational and allow persons who prefer the polygamy lifestyle to practice so.

The conversation got heated when Mr Dance replied by stating that “there is certainly no science or common sense behind your bill: only hatred, needless pain and the pursuit of an arcane colonial legacy.”

Anyone who thought he or she had seen the last of Sam Geroge aka Dzata was disappointed as the Ningo-Prampram legislator on July 24, hit back hard stating that Mr Dance’s elusive behaviour on the matter of legalising polygamy only shows how weak he is.

According to Mr Nartey George, Mr Dance should be ashamed of himself.

But Mr Seb Dance, concluding his comments on the matter held the position that Mr George, for the sake of votes, has decided to drive people into fear and misery. “You are a disgrace,” he stated.