A Ghanaian view of the Queen’s funeral: ‘They march, we dance’ 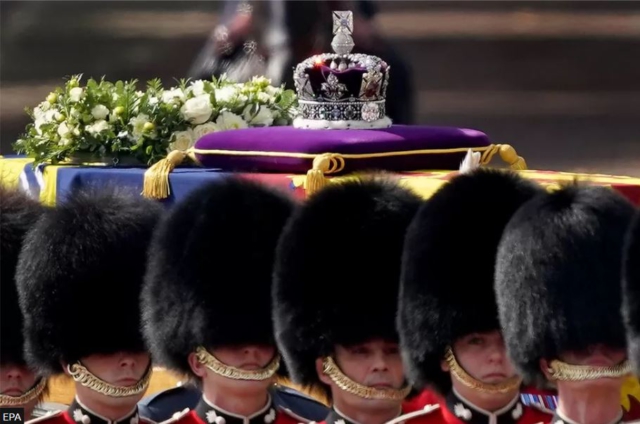 In our series of letters from African journalists, Elizabeth Ohene compares the funeral of Queen Elizabeth II to those in her home country, Ghana.

We do not have any personality that ranks on the scale of Queen Elizabeth II, so it is probably not fair to compare her funeral with how we do funerals here in Ghana.

But since we pride ourselves on being world leaders in funerals, it is not surprising that we have been watching the spectacle of her funeral with keen interest.

The first major departure from a grand funeral, as we know it, is to have buried the Queen within 10 days of her death.

In Ghana, the greater the status of the dead person, the longer the wait for the funeral. We seem to think that to bury someone quickly after her death is to show disrespect.

So, it will take some getting used to the fact that the Queen died on 8 September and was buried on 19 September.

Then there is the question of the long silences that characterised her funeral events.

Over here, funerals are extremely noisy affairs – on the funeral grounds and even in the church.

The noise level at our funerals is meant to be high. If we play music, we play it loudly. If we are drumming, it is very loud and any number of groups can do it at the same time.

We cry. We wail to show our grief. We are expected to demonstrate the pain of our loss by crying out loud and often hysterically.

Indeed, we hire professional wailers to provide an adequate backdrop to the funeral, so it might not be said that there was no crying at your mother’s funeral. It is the ultimate insult.

At the Queen’s funeral, if tears welled up in someone’s eyes, it was something to comment on. If a daughter-in-law wiped a silent tear, it made headlines.

People in the crowds kept apologising for being “emotional”, which is a code word for tears or for being on the verge of breaking down.

Everybody around here has been impressed by how orderly everything was at the funeral.

There were straight lines. Of course, we do not expect anything less from the military and since they took centre stage at the events, the regimented order was to be expected. Our funerals are more like organised chaos.

We know from long association with the British that they are generally punctual and do things on time, rigidly on time.

This is disconcerting for us here, where, in relation to funerals, time is at best an approximation.

To lie in state, the Queen’s coffin left Buckingham Palace at exactly the announced time – 14:22.

The state funeral service lasted for an hour. That certainly is disconcerting for a Ghanaian audience – it would have taken at least that long to introduce the VVIPs present. And with the whole world watching, the Archbishop of Canterbury gave a homily of less than six minutes!

All these considerations have led me to conclude that the main difference between our funerals and that of the Queen can be summed up as: They march and we dance.

A march is performed by a group and watched by multitudes. A march is rigid. It requires practice and rehearsals over and over again as you cannot put one foot wrong. You can’t join in. Emotions are out of place.

A dance is an art form that can be performed by a group and watched by multitudes, but it is participatory and all can join in. We make it up as we go along. There is room for mistakes and organised chaos.

DISCLAIMER: The Views, Comments, Opinions, Contributions and Statements made by Readers and Contributors on this platform do not necessarily represent the views or policy of Multimedia Group Limited.
Tags:
Funerals
Funerals in Ghana
Queen Elizabeth II
Queen Elizabeth II's funeral