A tour inside Ghana’s National Mosque 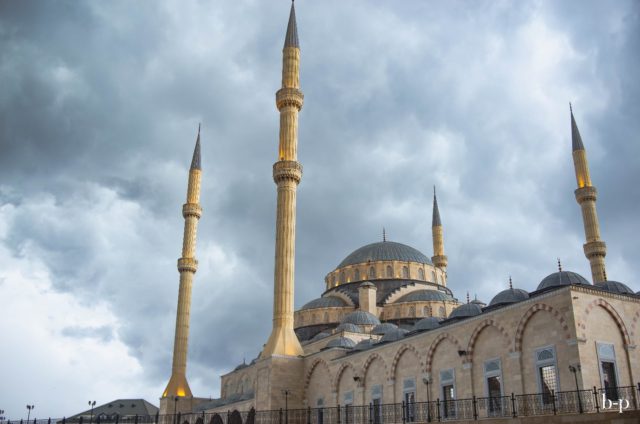 The National Mosque from the outside. Photo by: Samuel Baidoo

It is Tertilla Abdul-Rauf’s first day coming to the National Mosque since it was commissioned.

She pauses, takes a deep breath, and continues; “It’s so nice. The place is actually nice. I am happy Muslims from everywhere can come here to pray”.

Tertilla lives in Ablekuma, a suburb of Accra some 10 kilometres away from Nima, where the mosque is.

Her friend, who she came with, Teibatu Mustapha, is from the Western Region and also came to pray here after she had heard so much about the beauty of the place. “I feel honoured right now. Praying here feels different. It is such an awesome building,” she says.

Like Tertilla and her friend, most of the thousands who have come here to pray have come from far and near.

In July, Ghana opened its national mosque. One of West Africa’s largest- it is second only to the national mosque of Senegal. Funded by the Turkish government, it is a replica of the Blue Mosque in Istanbul. Thousands of people have already flocked there to see the edifice and its administrators are hoping it would become a sanctuary for tourism.

Being inside the facility is breathtaking. It was built to mimic Ottoman architecture, taken from the Blue Mosque of Istanbul, Turkey which is one of the world’s largest and where the Turkish Hudai Foundation, the organisation that gave the 10 million funding for its building, is based.

The floors are covered with thick carpets to cushion people kneeling in the edifice to pray. The four signature minarets tower about 65m above the ground, overlooking the Nima community- one of Ghana’s largest Muslim suburbs- where it is located.

The outside is fitted with Carrara marbles. The upper levels of the interior- designated for women- is painted blue with stained glass windows.

Calligraphic verses of the Quran – the Muslim holy book – are used for the décor inside.

“I have never seen anything like this before,” says Terithilla.

Before 1980, the country had a national mosque which is present-day Rawlings Park in central Accra. The government demolished it to make way for the park which at the time was necessary to open up the congestion that was building up in the city centre. In its place, the government handed out a four-acre land to the Muslim community.

“We had the land then but we did not have the money to start building it,” says Yusif Mahmoudu Yaro who is the Public Relations Officer for the mosque.

The complex has an imam’s residence, a school, a clinic, a library, and a morgue.

“All these facilities are not just for the Muslim Community. They are open to the general public,” Alhaji Yaro says.

With a 10 million dollar grant from the Turkish Hudai Foundation and the support of the Turkish government, the mosque finally was put commissioned in 2021 after it started in 2012.

The mosque has become a flocking place for the high and mighty. Today, Vice President Alhaji Mahmoudu Bawumia is praying here. The Jummah- the weekly congregation prayer- is led by Sheikh Osman Nuhu Sharabutu, the national Chief Imam.

“Allah (God) has blessed us with the gift of life and with this facility and we must be grateful. We must use our hands to take care of it,” the Chief Imam says through an interpreter.

At its commissioning, President Akufo Addo said; “The minaret of this mosque is very visible from many parts of Accra. For me, it is not just the beauty that it adds to Accra’s skyline that excites me necessarily.

“I am even more excited by the fact that, as a Christian-majority country, a symbol of Islam can beautifully adorn our landscape, and expose the beauty of religious harmony that we enjoy in Ghana, and which continues to be the envy of the rest of the world,”.

For Alhaji Yaro and his team of local volunteers manning the centre, top on the table is how to maintain the facility. “After the building of the mosque, we came into an agreement with the Turkish counterparts to help us maintain it for some time but we can’t continue like that forever,” he says.

Parts of the facility are yet to start full operations and he is hoping once they do, that would pull in some funds to support the maintenance. But for now, they are asking everyone- Muslims especially to give to maintain the national mosque.

“This is a beautiful gift. We can’t sit and wait for the Turkish to come and take care of it for us. That is why we are asking everyone- especially Muslims who Allah has blessed, to come in and support,” he says.

DISCLAIMER: The Views, Comments, Opinions, Contributions and Statements made by Readers and Contributors on this platform do not necessarily represent the views or policy of Multimedia Group Limited.
Tags:
Ghana
National Mosque
National Mosque of Ghana Complex