Abelenkpe gets modern Astroturf from CODA 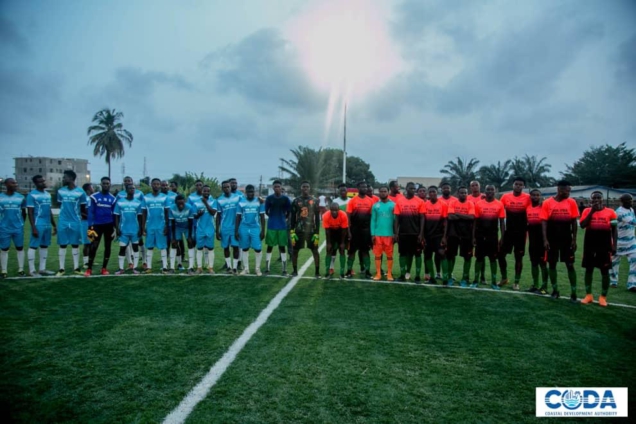 The Coastal Development Authority (CODA) has commissioned and handed over an Astroturf pitch to the Abelenkpe community in the Ayawaso West Municipality.

The project forms part of the vision of President Nana Addo Dankwa Akufo-Addo to provide each constituency with a modern multi-purpose sports facility.

The commissioning took place on Sunday, March 27, 2022, and was attended by some government officials and traditional leaders.

A commemorative football match was played between Abelenkpe Eleven and Tesano Eleven.

CEO of Coastal Development Authority (CODA), Jerry Ahmed Shaib explained that several Astroturf projects have been constructed in all six regions within the coastal zone under the Infrastructure for Poverty Eradication Programme (IPEP).

According to him, IPEP is one of the government policies under the Akufo-Addo administration, that allocates $1 million to each constituency for special infrastructure projects and social interventions.

CODA leads the implementation of IPEP in 109 constituencies in the six regions that make up the Coastal Development Zone.

He used the opportunity to touch on the CODA Clean Beach Campaign which is intended to make our coastal communities clean and free of filth and squalor.

The CEO appealed to everyone on the need to support the clean beach initiative in order to boost tourism.

The MCE for the Ayawaso West Municipal Assembly, Sandra Owusu Ahinkorah in her speech thanked the President, Nana Addo Dankwa Akufo-Addo for the creation of the Development Authorities, especially CODA.

According to her, CODA is bridging several developmental gaps through the construction of school blocks, drainages, health facilities, roads among others.

She pledged the Assembly’s commitment and support to ensuring that the facility is put to good use as well as putting in place an effective maintenance plan.

Mrs Alhassan stated that sports are special activities that help in bringing love and unity to communities and pray that the facility will help in maintaining peace and order in the constituency.

She thanked the CEO for the completion of the Astroturf project and appealed that more developmental projects should be brought into her constituency.