ACP Agordzo, 9 others re-arrested and charged with high treason 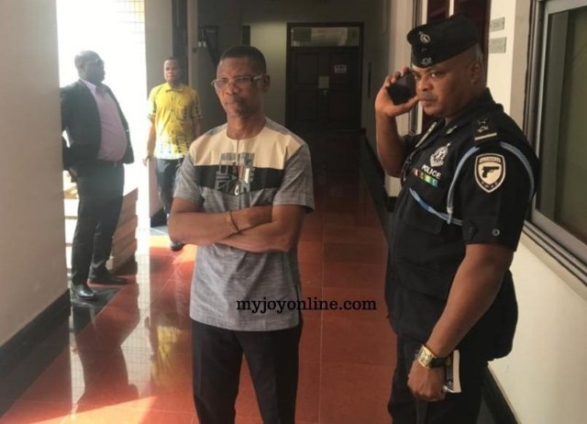 Embattled Assistant Commissioner of Police (ACP), Benjamin Agordzo and nine others have been charged with the highest crime of the land, high treason.

Dr Agordzo, according to his lawyer, was accused of assisting the alleged leader of the coup plotters, Dr Frederick Yao Mac-Palm, through messages he sent on instant messaging platform, WhatsApp.

He has denied this saying he is innocent arguing that he is being prosecuted for “speaking his mind” on the social media platform.

In court on Saturday morning, Attorney General Godfred Yeboah Dame told the High Court his office has already filed documents to discontinue the treason felony case and rather push for High treason which he said is the highest crime that can ever be committed by any person in the country.

He told the court that the accused persons between June 2018 to September 2019 engaged in an elaborate plot geared at overthrowing government with discussions on the possibility of killing the President as well.

The Attorney General told the court that the accused persons in furtherance of their objective manufactured guns and ammunitions.

They also intended to jam transmission of all media organizations except the state broadcaster GBC and capture key state actors, he said.

In June 2018, security agencies arrested members of the ‘Take Action Ghana’ for an “elaborate plot targeted at the Presidency.”

The accused person who are members of the group ‘Take Action Ghana’ are facing different charges.

The nine accussed person apart from ACP Agordzo were earlier held for conspiracy to commit treason and treason felony.

All accused persons pleaded not guilty to the charges of High treason, conspiracy to commit High treason and abetment to high treason.