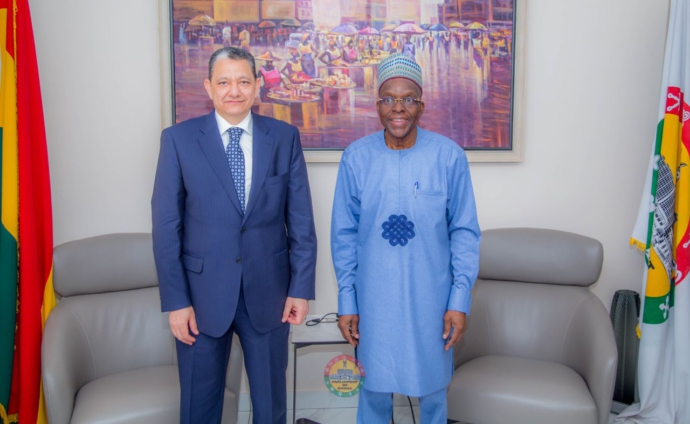 The Speaker, Alban S.K Bagbin has called on stakeholders in Africa to confront the challenges that have afflicted  the Pan-African Parliament to enable the  continental legislative body to resume meetings.

He said the continent’s resolve to strengthen diplomacy at the parliamentary level among its member states can only be meaningful if urgent steps are taken to resume the operations of the Pan-African Parliament.

“We have gone beyond the traditional function of parliament to using parliament as an effective tool for parliamentary diplomacy,” Bagbin noted.

The Pan-African Parliament (PAP) suspended its sittings after witnessing scuffles between some lawmakers over the election of new office bearers.

The suspension follows disagreements and disruptions that transpired during the procession of the plenary last year.

The Speaker made the call in parliament today during a courtesy call on him by the Egyptian Ambassador to Ghana, Aldesouky Mahmoud Youssef.

Youssef had called on Bagbin to announce his country’s readiness to build a Ghana-Egypt Parliamentary Friendships Association and also discuss strategies to deepen relations between both countries.

The Speaker used the occasion to recount the longstanding ties Ghana had built with Egypt, and reiterated his commitment to enhancing the bonds of friendship and cooperation for mutually beneficial outcomes for all.

The Egyptian Ambassador, commended Speaker Bagbin for the quality of leadership he is providing Ghana’s hung parliament and assured him of his country’s continued commitment to the Pan-African Egypt Policy.

He was hopeful that his time in Ghana would witness the strengthening of relations between his country and Ghana on the political, economic, commercial, educational, cultural, and healthcare fronts.