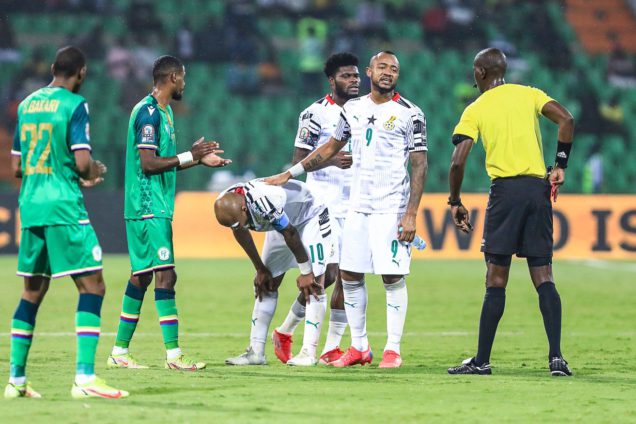 Ghana’s quest to conquer the African continent in the ongoing Africa Cup of Nations was hit with a snag on Tuesday, January 18 as they lost to Comoros in their last group game.

The Black Stars suffered a last-gasp heartbreak while chasing a goal that could have seen them progress into the last 16 of the tournament.

Going into the game, Ghana, who had picked up just one point in the opening two games, needed a win at all cost to ensure they stand a chance of advancing into the next round of the competition.

However, that result, as easy as it looked, was far from being achieved at Roumde Adjia Stadium on Tuesday night as Ghana ended on the losing side with a 3-2 scoreline.

Comoros had a dream start to the game after Ben El Fardou opened the scoring after just four minutes. The Red Star Belgrade forward raced onto a pass from Ibroihim Djoudja after identifying space in Ghana’s defence, and El Fardou didn’t hesitate as he fired past a motionless Joojo Wollacott in post for the Black Stars.

That goal was something Ghana were hoping and it was unfortunate they were the ones on the receiving end as the team’s confidence seemed to have dwindled early days into the game.

But there was still a long way to go until the team would actually give up all hopes of securing qualification as they saw more of the ball after conceding.

Abdul Fatawu Issahaku and Kamaldeen Sulemana tried their luck from long ranges as Ghana searched for an equaliser but it was the latter’s effort that looked to have brought an unfortunate event.

Though a good drive from the Stade Rennes winger, the rebound which was contested for by Andre Ayew saw the Ghanaian skipper taking an early shower as he was shown a red card by the referee after consulting the Video Assistant Referee (VAR), reducing Milovan Rajevac’s side to 10-men for the remainder of the 65 minutes.

Ghana were able to hold to the same score for the remainder of the first half and even came close to getting their equaliser before the break.

What looked to be a disadvantage was more like an advantage as Ghana played one of their best games in the competition.

After the recess, Rajevac made changes to his set-up in search of a change in fortune. Edmund Addo, Richmond Boakye-Yiadom and Joseph Paintsil were all introduced into the game but it would only take time before the team could get back to their best.

Ahmed Mogni doubled Comoros’ lead two minutes after the Serbian’s second and third substitutions, and El Fardou was involved again as he provided the assist for Mogni’s brilliant striker and put the game beyond Ghana’s reach.

But the game was far from over as Boakye Yiadom and Alexander Djiku scored two goals in 13 minutes to draw the Black Stars levelled and raise the hopes of Ghanaians of a dramatic end to the encounter.

A dramatic finish to the game? Yes. But it was Ghana who suffered the outcome as Benjaloud Youssouf did what Samuel Owusu had failed to do minutes earlier to possibly earn Ghana a winning goal.

The Chateauroux defender made a daunting run on the byline before cutting the back into the path of Mogni, whose only job was to tap into the net from close range to give the Coelacanths a lead in the 85th minute.

The 3-2 scoreline was all Ghana could get despite a spirited fight to overturn the narrative after conceding an early goal and going a man down before the 30th-minute mark.

What Does it Mean?

Tuesday night’s result means Ghana finished bottom in Group C of the 33rd edition of the AFCON, exiting in the group stages for the first time since 2006, 16 years ago.

In that competition, despite winning a game, a 1-2 loss to Zimbabwe in their last group game was not enough to see them through as they were eliminated on goal difference basis.

Since then, Ghana have gone past the group stage in the subsequent editions except in 2004, when they failed to qualify for the continental showpiece. During that run also, Ghana have finished second on two occasions (2010 & 2015).

The group stage exit in Cameroon will go down as one of the worst performances the four-time champions have put up in the AFCON in the 21st century.

What next for Ghana?

Rajevac has ruled out the possibility of leaving his post but of course, that will largely depend on the decision of the Ghana Football Association (GFA) in the coming weeks as to whether to keep the Serbian in charge or turn their attention elsewhere.

But for now, the 68-year-old will need to make plans for the upcoming 2022 World Cup qualifying play-off, which gets underway in March.

Ghana are yet to know their opponents in the final round of qualifiers with the Confederation of African Football (CAF) confirming the draw will be held in Douala, Cameroon, on Saturday, January 22.

Until then, the Black Stars need to plan ahead and ensure they give Ghanaians the needed reaction they deserve after a painful exit in the 2021 Africa Cup of Nations.