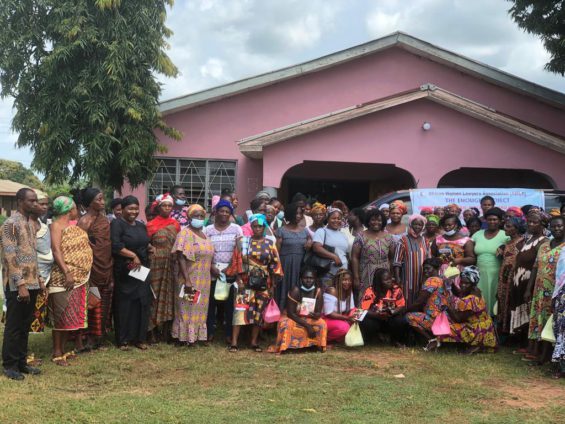 The African Women Lawyers Association (AWLA) is intensifying sensitisation on Sexual and Gender-Based Violence (SGBV) in communities within Techiman and Kintampo.

Since October 25, the organisation has mobilised and sensitised over 500 stakeholders in Tanoso, Oforikrom, Attabuorso, Nsuta, and Dentekrom, in Techiman and Chiranda, in the Kintampo Municipal.

The sensitisation aimed to raise awareness about the dangers SGBV poses to the education and development of children, particularly school girls in the Bono East Region, and the vital role of parents and community stakeholders in containing the menace.

This formed part of AWLA’s strategy to take education on SGBV directly to hard-to-reach communities in the Bono East Region, where sexual violence against women and girls has reached alarming levels.

In 2020, SGBV was exacerbated by school closures induced by Covid-19 when over 5000 girls, including school girls, got pregnant. Some of the girls were also married off to older men out of ignorance and poverty.

It took the efforts of key stakeholders for some of the pregnant girls to write their 2020 Basic Education Certificate Examinations and for some of the teenage mothers to return to school after having their babies.

Executive Director of AWLA, Madam Edna Kuma, who took participants through various aspects of the Children’s Act, with a focus on ‘the best interest of the child’, “it is important for parents and other community stakeholders to constantly protect children, particularly the girls, so they are not sexually abused by men or classmates.

According to her, to protect ‘the best interest of the child’, parents must endeavour to meet the needs of their daughters, so they do not become victims of sexual violence perpetrated by men”.

She also added that “incidence of abuses against children, particularly, girls must be reported, so that perpetrators are punished in accordance with the law to serve as deterrence to other potential abusers, and children must not be put in hazardous or any work that affects their education.”

DISCLAIMER: The Views, Comments, Opinions, Contributions and Statements made by Readers and Contributors on this platform do not necessarily represent the views or policy of Multimedia Group Limited.
Tags:
African Women Lawyers Association (AWLA)
sexual and gender-based violence
Techiman and Kintampo