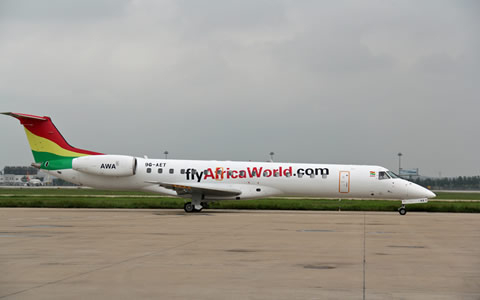 The airline is also planning to start its Abuja service by June.

The Chief Operating Officer of AWA, Apiggy Afenu, told Joy Business, carrier has what it takes to cover the whole of Africa in the coming months.

"Look at our track record, we started operations in September 2012, in 2013 we took our time to understand first the domestic market then later we went to Lagos. By 2014 we will cover the whole West Africa", Mr  Afenu revealed.

The airline is also planning to explore flying to Europe and the Americas by 2016.

Since the collapse of  Ghana International Airlines the country has not had any national carrier flying to Europe and the Americas.

"We are in business to make money and we take a rigourous approach to  route development so we will look all the options… and depending on which one we think is profitable, that is where we will fly to", he said.

Africa World Airlines Limited is a Ghanaian registered private-sector company formed with the vision of making air travel an option for majority of travellers within the markets in which it operates.

The principal founder/promoter of the Company is Togbe Afede XIV, the Chief of Asogli State and CEO of SAS Finance Group.

The airline has recently taken delivery 3 new and modern ERJ 145LR jets to commence its domestic and regional operations.

The route network is structured to create a hub-and-spoke model centered upon Accra.

This will allow a seamless one-change connection between multiple city pairs.