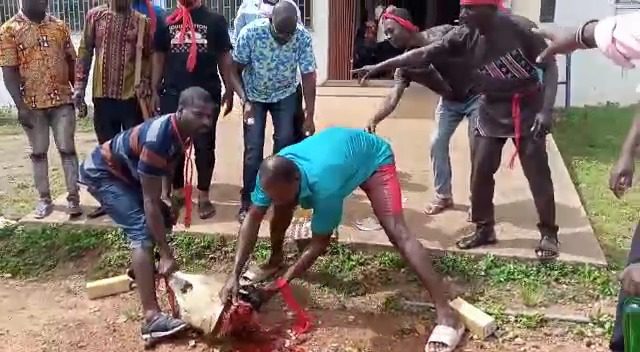 Some aggrieved Assembly Members in the Assin South District in the Central Region have invoked curses on the newly confirmed DCE for Assin South, Felicia Amissah Ntrakwah, Police Service and the Electoral Commission (EC) officials for not allowing them to take part in the confirmation of the DCE.

The group, made up of 15 assembly members slaughtered a sheep, cracked some eggs and poured libation with bottles of schnapps to invoke the curses.

They want the gods to deal with those who played a role in keeping them out of the confirmation process.

About a week ago, when voting was done, Felicia Amissah Ntrakwah failed to secure two-thirds of the votes in order to be confirmed.

She needed 24 votes, representing two-thirds to have been confirmed by the Assembly. A date was thus set for another round of voting to be done.

According to the Assembly Members, they were given 9:30 am as the reporting time. But, when they got to the venue, they got a text message that indicated Assin Nkran as the new venue for the election.

“We rushed there only to find the police there in their numbers. The Regional Chairman of the NPP, the MP for the area, the District Police Commander and the Regional Police Commander blocked the entrance and prevented us from getting in,” they alleged.

Nonetheless, the confirmation process went on and Felicia Amissah Ntrakwa secured 21 votes out of the 21 votes cast, representing 100%.

The assembly members expressed shock that they could be kept out of the process.

Therefore, with the eggs and schnapps in their hands, they stated, “We want to say that our electoral areas expected us to take part in the process and these tactics that have been employed are really shameful. It’s not the police that would vote to get our DCE for us.”

Furthermore, the group called on the President to ensure that his nominee is not recognized as the DCE for the Assin South District because the process used in electing her, was illegitimate.

The group has again threatened to head to the law court to nullify the process.

DISCLAIMER: The Views, Comments, Opinions, Contributions and Statements made by Readers and Contributors on this platform do not necessarily represent the views or policy of Multimedia Group Limited.
Tags:
Assin South
Central Region
MMDCEs appointment