AGRA calls for action to stem impact of climate change 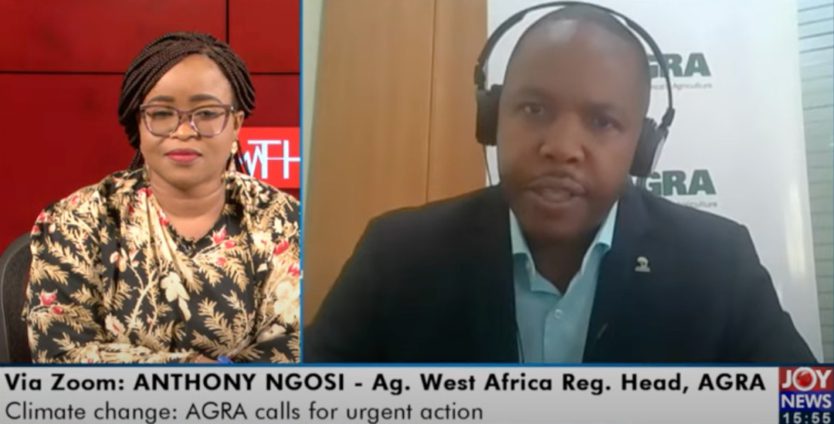 The Alliance for a Green Revolution in Africa (AGRA) is calling for urgent action to help stem the impact of climate change on the African continent.

“We have been experiencing more extreme weather patterns recently,” he said.

World leaders are gathering in Glasgow in the UK, for the 26th United Nations Climate Change Conference of the Parties (COP26), where they are expected to make commitments to help stem the phenomenon.

Mr Ngosi warns that higher temperatures are expected to cause more destruction to crop yields and increased pest and disease damage.

“Here in Ghana, last month, we saw in Northern region, Northeast and Upper West Regions, there were severe floods that damaged bridges, roads and left the districts challenging to access.

“And NADMO reported 7,000 farms were damaged. And so, we are seeing climate change damaging African lives,” he observed.

“Smallholder farmers are very reliant on steady rainfall patterns and good rains. With higher temperatures, we can expect more disease outbreaks on farms.

“And there will be a drop in productivity on farms. For example, an expected drop in crop yield of 3% in West Africa will affect the ability of farmers to feed themselves and their animals,” he added.

He disclosed that AGRA is working with the government to promote pest and disease-resistant varieties that can help farmers fight climate change and called for more efforts.

“There are varieties that are drought resistant and disease tolerant we are promoting. In addition, we have been promoting insurance to help farmers cope in times of need. We have also been working with government to build farmers’ capacity in monitoring food availability around the country in Ghana,” he said.

“Two years ago, we partnered with Forestry (Commission) to plant 160,000 trees in Ghana, and those are some of the things we can do,” he added.

There are concerns if no action is taken, climate impacts will lead to overall yield reductions of up to 30% by 2050 in Africa, while extreme weather events will result in higher post-harvest quality and quantity losses.

Climate change could wipe out 15% of Africa’s GDP by 2030. This could pull an additional 100 million people into extreme poverty by the end of the decade.

Efforts to deal with the situation include the Africa Adaptation Acceleration Program, a $12.5bn initiative from the African Union, the African Development Bank, and others to help enhance the continent’s ability to adapt to climate change.

The program builds on an earlier $12.5bn commitment from the AfDB and will focus on climate-proofing, creating new jobs and modernising key economic sectors to support national adaptation initiatives.

DISCLAIMER: The Views, Comments, Opinions, Contributions and Statements made by Readers and Contributors on this platform do not necessarily represent the views or policy of Multimedia Group Limited.
Tags:
AGRA