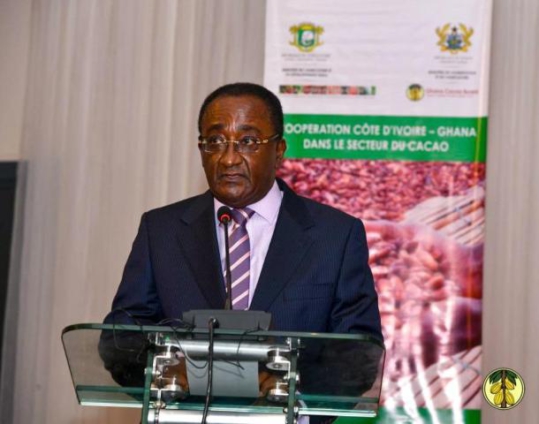 Agric Minister, Dr Owusu Afriyie Akoto, has been elected the first Chairman of the Steering Committee of the Ghana-Côte d’Ivoire Cocoa Initiative at its first meeting in Abidjan on Monday.

The two countries unanimously elected Dr Afriyie Akoto to chair the Committee for the next 15 months.

His Chairmanship will span the remainder of the current cocoa season which ends in September 2021 and continue until the end of the next cocoa season in 2022.

The Steering Committee is the highest decision-making body of the initiative.

It is responsible for formulating rules and regulations, ensuring the smooth implementation of the charter and functioning of the Secretariat, approve all budgets and work programmes of the Initiative, approve the rights and responsibilities of member countries and resolve conflicts among the member countries.

Dr Afriyie Akoto, in an address, described the meeting as historic and important since it sought to ensure the realisation of the vision of President Nana Akufo-Addo and President Alassane Ouattara.

Dr Afriyie Akoto, however, expressed concern about the “dragging of feet” by some participants to ensure that the Living Income Differential (LID) initiative was fully realised.

He charged the participants of the meeting to ensure that all parties share the burden of compliance with the dictates of the initiative, as that was the only means to achieve the vision of President Akufo-Addo and his Ivorian counterpart.

The meeting was attended by all members of the Steering Committee. Also, present was the Chairman of the Food and Agriculture/Cocoa Affairs Committee of Ghana’s Parliament, John Osei Frimpong and his ranking member, Eric Opoku as well as a delegation of senior Ivorian government officials.