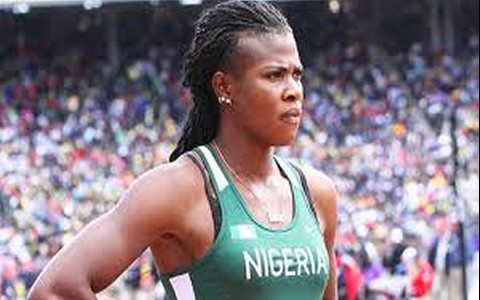 Blessing Okagbare could not have chosen a better venue to signal her arrival in sprint big league. At the Samsung Diamond League in Aviva, London, on Saturday, Sapele born, Okagbare shocked reigning Olympic and World champion, American Carmelita Jeter and Shelly-Ann Fraser-Pryce to claim the 100m gold in 11.01secs.

It was a beautiful day for the 2008 Beijing Olympic Long Jump bronze medallist.

Before that final race at Crystal Palace, the four-time Nigerian sprint champion had dipped for the first time under 11 secs, winning one of the heats in 10.99secs.

Just like her rival on the domestic front, Oludamola Osayomi did two years ago, it was a personal best and a dream come true for the Delta girl to have her very first sub 11 secs on a grand stage like the London Grand Prix.

“I have been waiting so long to break 11 seconds. I did not expect that time today (Saturday) and it gives me great confidence going into London 2012. I am happy to be in the mix,” said Okagbare before a battery of reporters in the mixed-zone of the London athletics fiesta.

Of course, leaving world champion, Jeter (11.03) and Tianna Madisson (11.13) to fight for the silver and bronze was no mean feat for Okagbare, who is Nigeria’s biggest medal prospect at the London Games kicking off in exactly 11 days from Monday.

Mary Onyali Omagbemi, Nigeria’s foremost sprinter sums up Okagbare’s weekend feat: “ I am not surprised Blessing won in London. I have followed her progression all through the season and found her very consistent. It is a big plus for her and Nigeria, with less than two weeks to Olympics.”

She told THISDAY Sunday that Okagbare’s time could have been better than what she clocked if the day was a perfect one.

”She and the rest of the field ran into a head wind on that wet day. If the weather was perfect, I strongly believe the time could have been better than what we are celebrating now,” stressed the former African champion.

Onyali-Omagbemi predicted that if Okagbare remains consistent, “I have no doubt that she is capable of running 10.8. If she does that at the Olympics, a medal is sure for her,” stressed Onyali whose 200m African record of 22.07sec remains unbeaten since the Atlanta 1996 Olympics.

Interestingly, Okagbare’s London feat has clearly erased her bad memory of losing the African Championships’ 100m title to Gabonese Ruddy Zang Milama a fortnight ago in Port Novo. The win reinforced her claim that she was ill.

“I have no doubt in Blessing’s capacity to hit it big in the sprint. If you recall what I told you when she lost in the final to that Gabonese, (Ruddy), at the African Championships, I said it just wasn’t her day. Two days before that race, Blessing took ill and as a former sprinter, I know what that means. I was shocked that she even came out of the ailment to still run and narrowly lost. It shows patriotism and professionalism. Several others would have pulled out of the competition,” recalled Onyali.

Will Okagbare add the sprint to the bronze from Beijing four years ago? Is her feat at the Aviva Grand Prix in London an appetizer of what is to come? Nothing is sure until the athletics events of the London 2012 kicks off on August 3. Only then, can Nigerians begin to look forward to big expectations from this lad whose feat remains unmatched at the University of Texas in El Paso (UTEP) where she set a sprint and long jump NCAA double.