Source: Ministry of Lands and Natural Resources
2 September 2021 10:44am 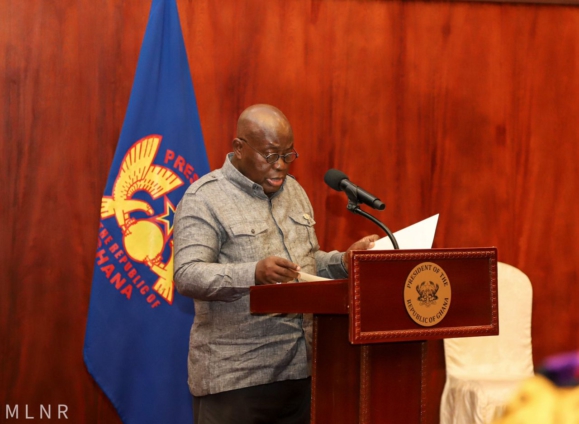 President Nana Akufo-Addo has directed that, henceforth, no public institution should deal in or allocate any land without the explicit approval of the Minister for Lands and Natural Resources.

He said, “the days when public lands were dissipated without regard for public interest are over.”

The President stated this when he inaugurated a 25-member National Lands Commission at the Jubilee House today, September 1, 2021.

President Akufo-Addo pointed out that, the duty of the members of the National Lands Commission is to manage Public Lands saying that, “these Lands are vested in the President for the people of Ghana.”

He emphasized that Public Lands allocated to State Institutions remained Public Lands, vested in the President and managed by the Lands Commission.

The President also charged the newly sworn-in members to aggressively pursue the digitization of the records of the Lands Commission, noting that “most of the reforms needed to build efficient Land administration will be within our reach if we are able to move away from manual registration to digital registration.”

He further reminded members of the National Lands Commission of the New Lands Act 2020 (Act 1036), which he said, gives a good foundation for the reforms being pursued by the Commission.

President Akufo-Addo also urged the commission to perform their functions under the general direction of the Sector Minister in accordance with the constitution.

Describing the task ahead as daunting, he expressed conviction that, with focus, good policies and determination, the National Lands Commission will deliver on its mandate and urged them to give maximum support to the dynamic Sector Minister, Samuel A. Jinapor to help transform Land Administration in Ghana.

On his part, the Chairman of the National Lands Commission, Lawyer Alex Quaynor assured the President that, the Commission Is focused on meeting the 30 days turnaround time for registration of title or deeds by the Commission target.

He also commended the Vice President, Dr Mahamudu Bawumia and Samuel Jinapor for their unwavering commitment and support to the Commission in ensuring that Ghana gets a robust Land Administration system.

DISCLAIMER: The Views, Comments, Opinions, Contributions and Statements made by Readers and Contributors on this platform do not necessarily represent the views or policy of Multimedia Group Limited.
Tags:
Ban of Public Institutions
Inauguration of 25-member National Lands Commission
President Nana Akufo-Addo
Public lands