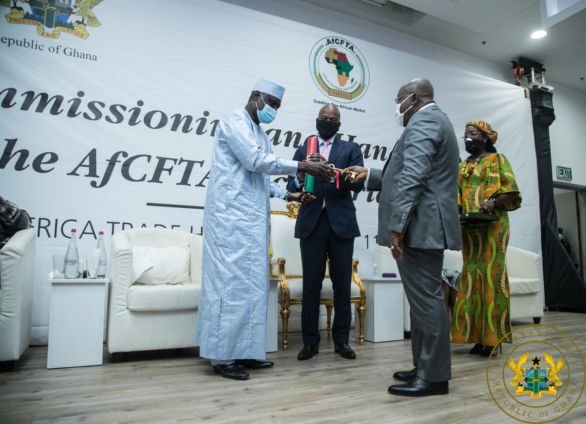 President Nana Akufo-Addo has commissioned and handed over the Secretariat of the African Continental Free Trade Area to the African Union (AU) Commission.

This was at a brief ceremony, at the Africa Trade House on Monday.

Delivering a speech at the ceremony, President Akufo-Addo stated that Ghana had discharged all of her obligations towards the establishment and the setting up of the office, following the selection of Ghana, in 2019, by the AU Assembly to host the AfCFTA Secretariat.

“We are, today, handing over a fully furnished and befitting office space, in a secured and easily accessible location within the business centre of Accra, as the Permanent Secretariat of the AfCFTA. We have provided also an appropriate, furnished residential accommodation as the official residence of the Secretary-General of the AfCFTA,” he said.

With Africa’s low levels of intra-Africa trade, as compared to those of the European Union, the President explained that this situation hinders Africa’s prospects of bringing prosperity to her peoples.

“A large part of the growth and prosperity that we seek on the continent will come from us trading more among ourselves. We, in Ghana, believe that an increase in trade is the surest way to deepen regional integration in Africa,” he said.

An effective implementation of the AfCFTA, President Akufo-Addo told the gathering, will dispel the notion that the AU is not capable of executing its own decisions, explaining that Africa’s new sense of urgency and aspiration of true self-reliance will be amply demonstrated by the handing over ceremony.

The President, thus, appealed to all Member States, who are yet to ratify the AfCFTA Agreement, to take advantage of the postponement of the date for start of trading, and do so by December 2020, to enable AU Member States to trade fully among themselves, so Africa can harness the benefits of the AfCFTA together.

“The pandemic has heightened the importance of the success of the AfCFTA. The disruption of global supply chains has reinforced the necessity for closer integration amongst us, so that we can boost our mutual self-sufficiency, strengthen our economies, and reduce our dependence on external sources,” he said.

The President continued, “We are now the world’s largest free trade area since the formation of the World Trade Organisation, and we must make it count. Covering a market of 1.2 billion people, with a combined GDP of $3 trillion, across the 54 Member States of the AU that have signed up to the Agreement, it will provide the vehicle for us to trade among ourselves in a more modern and sophisticated manner; it will offer a huge opportunity to exploit the abundant wealth and resources of our great continent for the benefit of all our people, and it will give us protection in how to deal with other trading blocks.”

In welcoming the newly elected first Secretary-General of the Secretariat, Mr. Wamkele Keabetswe Mene, and his family to Ghana, President Akufo-Addo urged him to work towards building a strong, efficient and effective Secretariat, with the capacity to implement the various trade rules, in line with the text of the Agreement, to help build credibility, and reduce trade policy uncertainty in the continent.

“The world is watching to see whether the Secretariat will, indeed, provide the springboard for Africa’s economic integration and rapid growth, and I am confident that, under your tenure, it will. Mr. Secretary-General, be rest assured of the firm support of the Government of Ghana for your work and activities,” he added.

President Akufo-Addo, in concluding, commended the President of the Republic of Niger, His Excellency Mahamadou Issoufou, current Chair of ECOWAS, for the stellar work he has done in championing the African Continental Free Trade initiative.

He congratulated and saluted and congratulated Cyril Matamela Ramaphosa, President of the Republic of South Africa, and current Chair of the Authority of the Assembly of the AU, for the benign, progressive guidance and supervision he has offered to make handing over ceremony possible.