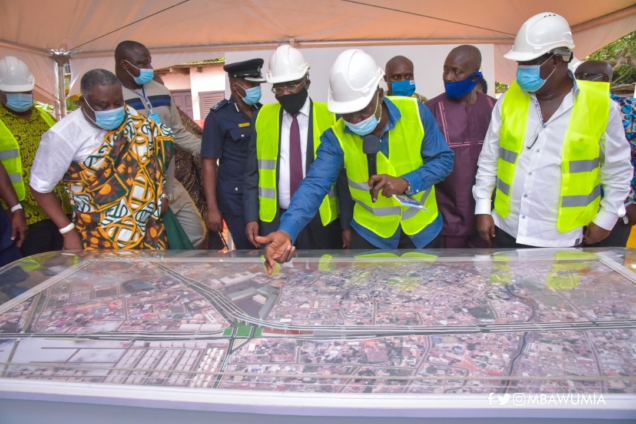 The projects cut across the sectors of the economy, including roads, industry, agriculture, water and sanitation, airports, energy, fish landing sites, and sea defence.

At the eighth Government Townhall meeting and Results Fair held in Accra on Tuesday, Dr Bawumia made data-driven and evidence-based presentation on Government’s infrastructure projects over the last three and half years in office.

In making comparative value for money analysis, Dr Bawumia said the cost of projects undertaken by the previous government was quite outrageous.

For instance, he said, while the Akufo-Addo led Government was constructing four major interchanges in Tema, Pokuase, Tamale and Obetsebi-Lamptey at the cost of $289m, the Mahama administration built the Kwame Nkrumah interchange alone at a cost of $260 million.

He said the Pokuase interchange was 75 per cent complete. The loan agreement for the project was signed in November 2016 for a three-tier interchange, but the Akufo-Addo government re-negotiated for a four-tier interchange without any increase in cost.

The Tamale interchange, the first ever interchange in the Northern sector of the country, was 44 per cent complete, and expected to be completed by the middle of 2021.

Vice President Bawumia announced that next month, a sod would be cut for the construction of an interchange at PTC in Takoradi of the Western Region.

Dr Bawumia said Government had initiated 17, 334 infrastructure projects since 2017 out of which 8,746 had been completed and 8,588 were at the various stages of completion.

On road projects, Dr Bawumia said 1,927 had been undertaken out of which 1,307 had been completed while 620 were under construction.

Five hundred and eighty-nine kilometres (km) of road had had Asphaltic Overlay in urban areas while another 143 km of roads were being rehabilitated and upgraded.

“The infrastructure record of the Akufo-Addo administration is second to none with verifiable data to back my claims and when compared to any government in its first term of office under the Fourth Republic,” Dr Bawumia emphasised.

Apart from the value for money comparison in the road sector, analysts had also raised eyebrows on disparities in the cost of hospitals the current government is building and those built under Mahama.

The Results Fair organised by the ministries of Monitoring and Evaluation and Information as well as the Office of the Senior Minister creates a platform for the Ministries, Departments and Agencies to present development projects that had  undertaken, to enhance transparency and accountability.