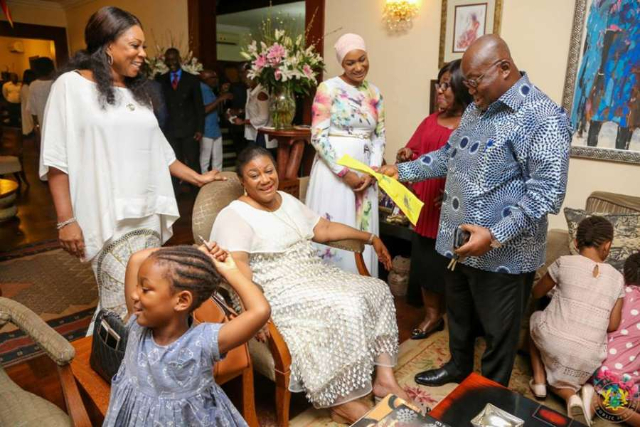 President Nana Addo Dankwa Akufo-Addo has offered to personally compensate scores of traders set for eviction, after their business locations were deemed too close to his Nima home, designated a national security zone.

Minister of State in charge of Security, Bryan Acheampong who confirmed this, would not reveal the entire cost of the compensation package.

But payments between 1,000 cedis and 12,000 cedis have been quoted for businesses numbering about 30 cited in front of the President's house at Korle Wokon in Nima in the national capital, Accra.

He indicated, some are as close as 25 feet from the front gate of the president's Nima home, Betty House, as it is known.

"Are you telling me that these people should be there," asked the Minister who is also New Patriotic Party (NPP) Member of Parliament for Abetifi in the Eastern Region.

The political science professor, Ransford Gyampo, has criticised the relocation as needless because the president is not supposed to live at Nima any longer after winning the 2016 race to the Flagstaff House.

By winning the race, the President ought to move into the seat of government sparsely used after it was built in November 2008. The professor wants the traders to be left alone.

But Bryan Acheampong said any property belonging to the president is a national security zone even if he does not use the property.

The President owns three houses, one built by his father (Nima), another built by his mother (Kyebi) and one he built (East Legon),

The Betty House, he said, has "high-value targets" who are family members of the president.

The presence of the traders makes it difficult to profile persons within the Nima area, the Minister explained.

He would not reveal if the president lives permanently at the Flagstaff House explaining, Akufo-Addo's location is "not a matter we should be discussing on air".

He said the president prefers to have private meetings in his private home and comes to Nima "each and any other day".

Even in his hometown at Kyebi is a national security zone, he said.

Byran Acheampong said it would be "very lazy not to put a permanent security arrangement" in place for the president of Ghana.

'We are talking about the President of the Republic', he repeatedly said.