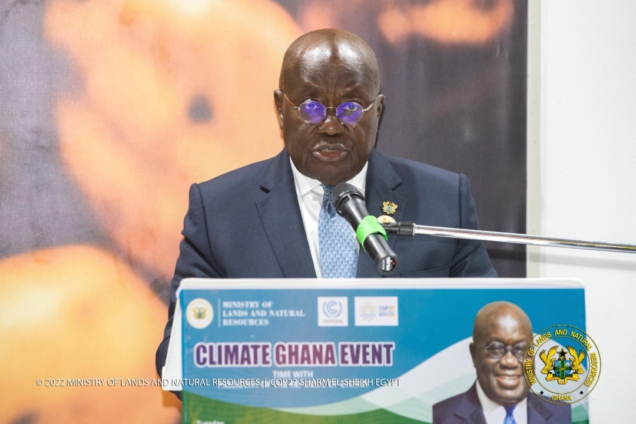 According to him, Ghana has historically demonstrated commitment to contributing to finding solutions to global challenges, and climate change is no exception.

He pledged Ghana’s commitment to working with all stakeholders to reverse land degradation and deforestation, and halt climate change.

The President was speaking at Ghana’s Pavilion at the ongoing 27th session of the Conference of Parties (COP27) of the United Nations Framework Convention on Climate Change (UNFCCC) in Sharm El Sheikh, Egypt.

The event was organised by the Ministry of Lands and Natural Resources to present Ghana’s current actions on greenhouse gas emission reduction strategies, ambitions towards her Nationally Determined Contributions (NDCs), and opportunities for greater collaboration and impact investment.

Speaking at the event, the Minister for Lands and Natural Resources, Samuel Abu Jinapor said under President Akufo-Addo’s leadership, Ghana has reduced deforestation by thirteen percent (13%), and is on course to become the first African country, and second in the world, to meet the European Union’s (EU) requirement to trade in legal timber.

He said the country has also been approved to receive a Three Million United States Dollars (US$3,000,000.00) grant from a new trust fund at the World Bank, known as Enhancing Access to Benefits by Lowering Emissions (EnABLE).

He said delivering climate action requires dedicated collective action. He called on all Governments and stakeholders to join forces and work together towards 1.5 degrees Celsius.

The President added that Mr. Jinapor will co-Chair a new Forest and Climate Leaders’ Partnership, aimed at bringing Governments and the private sector together to halt deforestation.

In a related story, the Minister for Lands and Natural Resources has called for collective action to deliver nature-based climate solutions.

Speaking at a Panel discussion organised by the Government of the United Kingdom, Mr. Jinapor said the effects of climate change are trans-jurisdictional, and requires multilateral action rather than working in silos.

Citing the agriculture commodity system as an example, the Minister said it was important to bring together producers and consumers to forge a pathway for sustainable production and consumption.

At a different event organised by the Government of the United States, Mr. Jinapor called on stakeholders to put farmers and fringe communities at the centre of climate engagements.

He said if farmers and members of fringe communities, are to change their ways of life to protect forests, they must see real benefit accruing to them.

He said if cocoa farmers, for example, are left at the bottom of the cocoa value chain with no real benefits, it will be difficult to convince them to adopt sustainable agricultural practices.

Mr. Jinapor called on all Governments and the private sector to deliver on their promises, particularly on climate financing.

This year’s Conference of Parties (COP) is termed an implementing COP, as it calls on global leaders to take action on their promises.

DISCLAIMER: The Views, Comments, Opinions, Contributions and Statements made by Readers and Contributors on this platform do not necessarily represent the views or policy of Multimedia Group Limited.
Tags:
Akufo-Addo
COP27
Ministry of Lands and Natural resources
Samuel Abu Jinapor