The American Civil Liberties Union (ACLU) and Planned Parenthood, an abortion and healthcare provider, have sued Alabama over its ban on abortion.

The ban, which offers no exceptions for rape or incest, was signed last week but has not taken effect.

Anti-abortion supporters expected legal challenges, and hope the appeals will reach the US Supreme Court and allow them to re-visit federal laws.

Randall Marshall, executive director of the Alabama ACLU, said: “Abortion remains – and will remain – safe and legal in Alabama. With this lawsuit, we are seeking a court order to make sure this law never takes effect.”

The southern state’s controversial abortion law has made national headlines for weeks.

Under Alabama’s new ban, physicians who provide abortions could go to jail for up to 99 years, but a woman seeking the procedure would not be criminally liable.

The law allows exceptions only if the mother’s life is seriously at risk or the foetus has a fatal complication.

Alabama is one of several states to pass highly restrictive abortion laws this year – and dozens more have proposed similar bills in their legislatures.

On Friday, Missouri’s governor signed into law a bill banning abortions after eight weeks of pregnancy, with no exceptions for rape or incest.

The governors of four states – Georgia, Kentucky, Mississippi, and Ohio – signed bills in recent months banning abortion if an embryonic heartbeat can be detected.

Currently, abortion is still allowed in the US thanks to the landmark 1973 Supreme Court decision in Roe v Wade, which ruled that abortions are protected up until viability – the point at which a foetus is able to survive outside the womb, around the third trimester of a pregnancy. 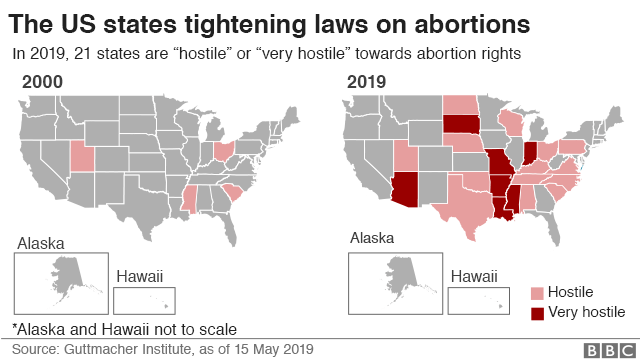 These types of anti-abortion laws have been deemed unconstitutional in the past, but supporters are emboldened by the addition of two conservative justices nominated by President Donald Trump, Neil Gorsuch and Brett Kavanaugh, who give the nine-member Supreme Court a conservative majority.

As the Alabama bill’s sponsor, state congresswoman Terri Collins explained to the Washington Post: “What I’m trying to do here is get this case in front of the Supreme Court so Roe v Wade can be overturned.”

The top court earlier this year blocked abortion restrictions in Louisiana – but only by a narrow margin, and that case is slated for a review later this year.

And the issue remains divisive nationwide – a 2018 Gallup poll found 48% of US women identified as pro-choice and 47% as anti-abortion.

One of the plaintiffs in the complaint, Dr Yashica Robinson, said Alabama women “already have to overcome so much just to get to our doors and this law further shames them, punishes providers like myself and stigmatises essential healthcare”.

The ACLU and Planned Parenthood statement notes that they have “never lost a challenge to an abortion restriction in Alabama”.

Similar abortion restrictions have already been blocked by legal challenges in Kentucky. The ACLU and Planned Parenthood are also filing challenges in Ohio and Georgia.