All is set for MUSIGA Presidential Debate 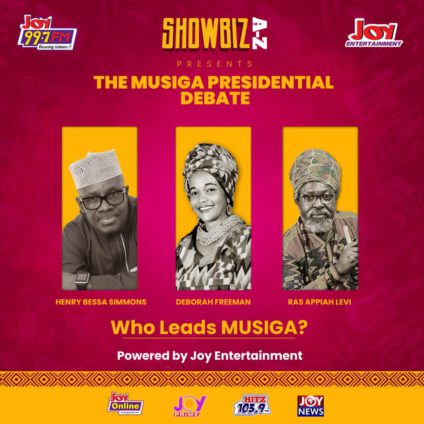 Team Showbiz A-Z, organizers of the debate, have put in place all necessary measures to ensure a successful event. Even more important is the readiness of all three candidates who are eyeing the topmost office of the union.

The event, which will take place at the plush Labadi Beach Hotel at 2 pm will see Bessa Simons, Deborah Freeman, and Ras Caleb Appiah Levi, battle it out with their thoughts, plans, ideas, and dreams, in an attempt to convince electorates to throw their weight behind them in the January, 2022 MUSIGA elections. This is the first-ever debate prior to the MUSIGA elections in the history of Ghanaian showbiz.

Speaking on JoyNews’ AM Show, Deborah Freeman, who remains the only female to contest in this year’s MUSIGA elections stated clearly that she is excited about the debate and will use the platform to outline her positive thoughts intended to take MUSIGA on an ambitious journey.

She related her biggest concern to Host Animwaa Anim-Addo, which doubles as her motivation to contest for the spot, saying “the industry is polarized, we are so disunited to the disadvantage of industry players and the nation as a whole”.

Deborah Freeman is determined to change the narrative because she believes “there are fantastic guys who used to be members of the union but due to certain situations they have all left”. She mentioned her goal is to put together a formidable union that will ensure the progress of the union and industry.

Ras Caleb Appiah Levi who also spoke on the JoyNews’ AM Show, blamed the exit of the union’s members on lack of transparency and accountability.

He also expressed some of his concerns, citing, for example, the non-existence of proper policies. He shared one of his goals, saying “my first take is to engage the government and parliament to make up certain policies that will govern the royalties and copyrights of musicians”.

Ras Caleb, who took up a legal battle against the current administration of MUSIGA says he did it in an effort to get the union on the right track. His quest to lead MUSIGA now is a reflection of his truest ambitions for the Union and believes if, given the mandate, he will steer the entire industry in the right direction.

Bessa Simons who is the Acting President of MUSIGA is also prepared and ready to unleash his plans at the debate that happens on December 4 at Labadi beach Hotel.

The event is powered by Joy Entertainment and brought to you by Showbiz A-Z. The event will be broadcast live on Joy 99.7 FM, a station for discerning listeners.

DISCLAIMER: The Views, Comments, Opinions, Contributions and Statements made by Readers and Contributors on this platform do not necessarily represent the views or policy of Multimedia Group Limited.
Tags:
Joy Entertainment
MUSIGA
Musiga Presidential Debate
Showbiz A-Z