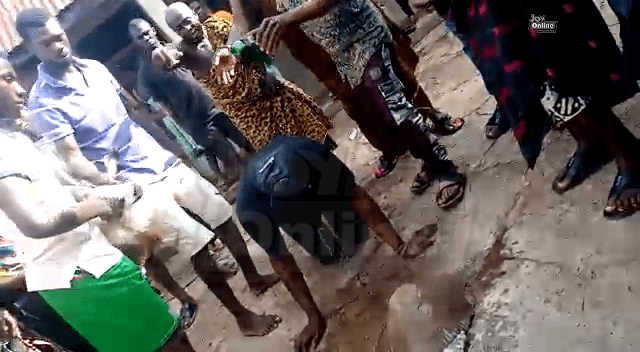 The Nkoranza Traditional Council in the Bono East Region has banished the 21-year-old man who was allegedly caught engaging in homosexual activity.

According to Adom News’ Christian Ofori Kuma, he was banished after being ordered to procure some items to appease the gods of the area.

The items, which include sheep and Schnapps, were not only to drive away bad omen from the area, but also exorcise the gayism from the young man.

Yaw Razak Barima is reported to have been apprehended by some men in the area on Wednesday, October 6, 2021.

In a viral video sighted by Myjoyonline.com, Yaw’s captors were captured physically abusing him amidst scolding him for engaging in what they described as an “abomination”.

He was subsequently, whisked to the Queenmother’s palace where he was ordered to procure items to pacify the gods of the community.

After meeting the demands, Yaw was on Friday taken through a series of rituals as required by the Nkoranza customs.

Dressed in black, he was made to kneel while the drink was poured over his head and the sheep slaughtered before him amidst incantations by some elders.

Following the rites, the Queen mother of the area, Nana Yaa Dudaa Kani I, declared that the activities of Lesbian, Gay, Bisexual, Transgender and Queer (LGBTQ+) have been banned in the traditional area.

According to her, homosexuality violates the traditional and cultural beliefs of the area, thus, whosoever participates in it will incur the wrath of their deity.

DISCLAIMER: The Views, Comments, Opinions, Contributions and Statements made by Readers and Contributors on this platform do not necessarily represent the views or policy of Multimedia Group Limited.
Tags:
Bono East Region
LGBTQ+
Nkoranza Traditional Council