Allianz World Run rallies staff for a good cause - MyJoyOnline.com

Allianz World Run rallies staff for a good cause 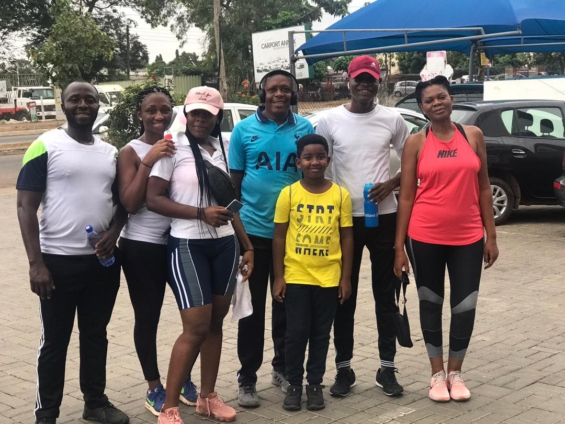 Five years ago, the first Allianz World Run event – an initiative by the global insurance firm, was held.

The guiding principles on which the Allianz World Run were designed are, for yourself, for your team and the global goals. This remains as true today as they were five years ago.

On July 8, 2020, staffs of Allianz Ghana dusted off their trainers and dug out their gym clothes to partake once more in the Allianz World Run along with over 12,000 other participants worldwide.

The Allianz World Run is a 3-month long charitable walk/jog/run which is all about challenging one’s self, meeting new colleagues and supporting amazing causes.

This year as a result of Covid-19 and its attendant restrictions on movement imposed in many countries, over 90 other sporting disciplines including swimming, cycling, aerobics, dancing, skipping, yoga, boxing, Zumba and running on a treadmill were included and tracked digitally.

Allianz staff, Sales Executives, family, friends and basically anyone interested in supporting a charitable cause while working out, joined the annual Allianz World Run and took up the challenge to move for a good cause.

For the past five years, the SOS Children’s Villages has been the charity of choice to benefit from the Allianz World Run.

Since the Allianz World Run began in 2016, Allianz has supported 32 projects in 28 different countries with their partner SOS Children’s Villages.

Globally, the target this year was to meet 5 milestones between two million and eight million active minutes cumulatively.

For each milestone unlocked, sustainability projects were to be rolled out by Allianz to provide support to children in communities of five SOS Children’s Villages in Rwanda, Zambia, Ethiopia, Uganda and Nigeria suffering from the prevalent issues of climate change and Covid-19.

A new record was set globally when Allianz met and exceeded the five-set milestones set for the 90 days after just a month of starting the Allianz World Run.

At the end of the 90 days, a total of 25,011,809 active minutes were logged which enabled Allianz to not only roll out the projects in these 5 countries but also to further expand the project in Rwanda.

The charity project focuses on infrastructural developments to grant proper nutrition, medical and hygiene measures for communities whose livelihoods have already been strained on top of pre-existing challenging living circumstances.

For the first time this year, Allianz’s contributions will also be funding sustainability projects in these villages to help them recover from the heavy impact they are suffering from climate change, thus enabling long-term solutions for communities through renewable energy and sustainable resources.

Team competition prizes for teams with the record for a total distance run, the average distance run per employee and the total number of participants also won 10,000 euros each to be donated to a charity of their choice.

The team from Allianz Ghana, known as the Trailblazers, also beat its target of 10,000 km and its attempt to be amongst the top 3 teams in Africa.

After several individual and group walk which took place across the country, where healthy competition and encouragement pushed many out of their comfort zone, Allianz Ghana came second in Africa.

Speaking at a short ceremony to award the top 10 staff and top three family and friends who contributed to Team Ghana’s success in the Allianz World Run, the CEO of Allianz Insurance Ghana, Darlington Munhuwani, said,  “With COVID-19 we were not sure we could hit the target of 10,000km that we set for ourselves.

However, through healthy competition and encouragement, together with our families and friends, we pushed ourselves to complete 25,238kms and came 2nd in Africa,” he added

CEO of Allianz Life Insurance Ghana, Gideon Ataraire, added, “For many of us, once we knew that just by being active, we could impact lives of those who most need it, it was easy to find the motivation to be up and running.”