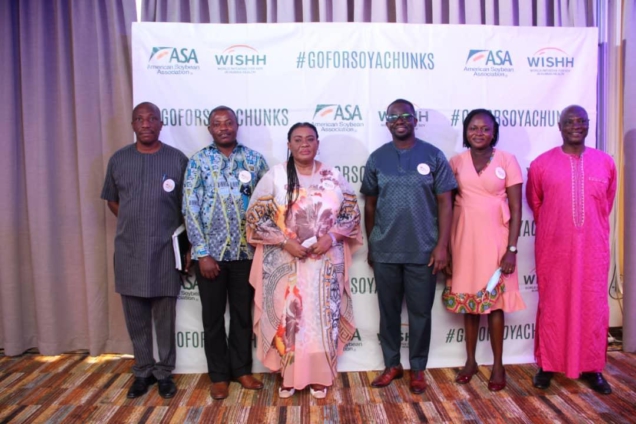 The American Soybean Association (ASA) and the World Initiative for Soy in Human Health (WISHH) have officially launched the campaign, ‘Go For Soya Chunks’, as the best alternative to meat protein.

The initiative, which will be implemented in the country by The Little Cow Consulting Limited, seeks to promote local consumption and daily usage of soya chunks in their foods.

Because of this, ASA/WISHH has partnered with the Ghana School Feeding Programme (GSFP) and the National Association of Domestic Bursars and Matrons (NADBAM) to ensure that the food is inculcated in school meals.

Speaking at the launch on Friday, July 23, 2021, the Representative for ASA and WISHH, Chris Slemp, said the product, when welcomed, will ensure food security in the country.

“Currently, global efforts are on track to meet the UN’s SDGs, including SDG number 2, which is to “End hunger, Achieve Food Security and Promote Sustainable Agriculture”.

“To address the challenge of food security in the world, it is important to accelerate the production of healthy, protein-rich foods; this presents another clear opportunity for soya,” he stated.

The Representative also indicated that soya, being a high protein food, will assist the Ghana School Feeding Programme in providing nutritious meals to students.

On her part, the GSFP National Coordinator, Dr Gertrude Quashigah, expressed satisfaction over the introduction of soya chunks in meals served to students.

According to her, since the protein-filled product was introduced to the feeding programme, none of the about 16,000 caterers under her supervision have reported any issues.

“The benefits of the soya chunks by caterers are several. In fact, caterers have been calling our offices for the supply of soya chunks ever since they were introduced to it,” she stated.

She also called on the Supply chain partner, Yedent Agro Limited, to establish distribution points across the regions and districts for caterers to have unlimited access.

Soya chunks are touted to be very healthy, filled with proteins and omega-three fatty acids. They are also rich in calcium and iron while providing no extra sugar or sodium to the body.

Soya chunks pack numerous benefits and enable faster muscle building and metabolism. In addition, they are great for the health of bone, hair, and skin health.