ANALYSIS: Only these players from Ghana's 2017 AFCON team should go to Egypt. [Infographic] - MyJoyOnline.com

ANALYSIS: Only these players from Ghana’s 2017 AFCON team should go to Egypt. [Infographic] 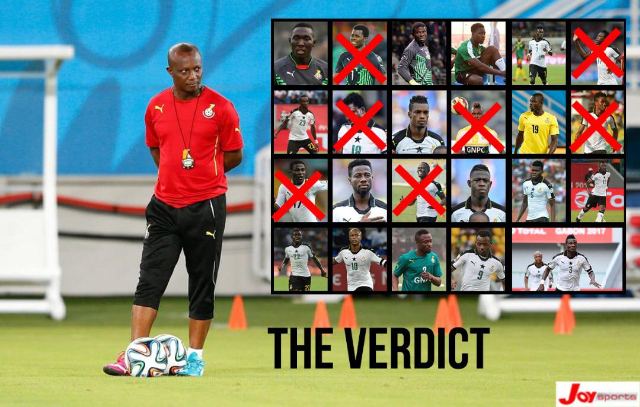 With a month to go to the start of the 2019 Africa cup of Nations in Egypt, expectations for the Black Stars to end their 37-year trophy drought is huge among Ghanaians.

And to achieve that, head coach Kwesi Appiah needs a perfect squad. The provisional squad will be announced on May 20 before the official 23-man squad is submitted to CAF in June.

With this year’s tournament set to have 24 participating teams, 23 players would be more beneficial since there would be an extra match (round of 16 stage) if Ghana progress from the group.

Ahead of the announcement, Joy Sports’ Owuraku Ampofo has analysed the 2017 squad and picked players who should make this year’s squad. In 2017, under the tutelage of Israeli trainer Avram Grant, failed to build on their second-place finish in 2015 as they ended up fourth.

Brimah hasn’t been a fan favourite since he insulted Ghanaians via a social media post during the 2017 AFCON and at club level, he’s not been actively involved in the past two years. He has played just five matches.

He has been Kwesi Appiah’s trusted goalkeeper in recent years. The 1.91m shot-stopper had a standout season with Maritzburg and has been linked with South African giants Orlando Pirates as well as a move to Europe.

The Eyimba move seems to have given him the much-needed revival in his career but it will be a tough call for Kwesi Appiah to make.

His versatility could be very useful especially in a tournament where so much physicality is required. He has also had a good season in China playing for Tianjin Teda.

Afful has been Ghana’s first choice right back for over five years. This season he has given a positive account of himself at MLS side Columbus Crew SC.  Another trait he possesses is experience which could prove to be a handful.

Despite facing some recent criticisms, John Boye has been Kwesi Appiah’s go to man in the defence. He has also been involved in the most games for any Black Stars player in Europe this season, amassing 38 appearances as his side Metz secured qualification to the French top-flight.

Jonathan has been with the Black Stars for nine years now and he barely disappoints anytime he is given the opportunity. He played a bit part role in the qualifiers, making just one appearance but his consistency at club level could be enough to convince head coach.

Unfortunately, the Leicester City defender will not make the tournament because of a broken ankle. He hasn’t played football since October 2018.

The very talented left-back has struggled to find his feet after he suffered a knee injury during the 2017 tournament. The injury kept him out of action for 16 months. He joined Reims in January and managed to finish the season with 10 appearances but the feeling is he may not be fit enough.

Moved a step higher in his career after joining Championship side Reading from Barnsley. 44 appearances since the start of 2018 shows how well equipped Yiadom is.

He played in three AFCON qualifiers and has also been a consistent player for Empoli this season featuring in 26 appearances.

His move to Bursaspor didn’t go as expected as he spent most of his time on the sidelines due to injury.

One of Ghana’s key players during the qualifiers, of course, he has to be there. He contributed to Newcastle United’s impressive campaign in the Premier League this season.

A move to Bidvest Wits hasn’t been the best for Gyimah as he managed just 6 appearances this season. Unfortunately, he hasn’t done enough to make a case for himself.

He scored in the qualifier against Ethiopia and was subsequently called for the Kenya match. A poor performance in Nairobi saw him axed from the squad for the last round of qualifiers. Ofori’s chances at the moment are hanging in the balance.

He has been a consistent feature in the Atletico Madrid side and he is undoubtedly Ghana’s best player heading into this year’s tournament.

He picked up a knee injury after the 2017 AFCON and was out of action for six months. He is slowly getting into his stride at LASK Linz but will be facing stiff competition for limited attacking slots.

He seems to have rediscovered his form after joining Spanish side Alaves. His performances in the matches against Kenya and Mauritania have certainly cemented his place.

Despite making 20 appearances for Le Havre, Assifuah has gone off the international radar and that is predominantly because he failed to take his chances when called upon.

Hasn’t been the best of seasons for the former West Ham forward but he will be in the squad because of his experience and the fact that he is vice-captain.

One of Kwesi Appiah’s trusted weapons up front. He has three AFCONs under his belt and is in pole position to make that number four.

Recently came back from injury but two goals in his last match for Kayserispor did show why he could be a useful tool in Egypt. Moreover, the captain of the side certainly has to make the squad.

11 goals this season presents a good case for the German-based striker Tekpetey. However, considering how Kwesi Appiah has been spoilt for choice in the attacking department, no assurances can be made here.