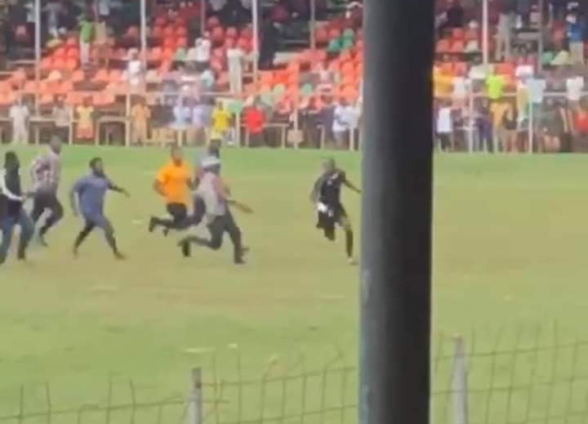 Referee Maxwell Hanson running away from his attackers

Communications Director of the Ghana Football Association, Henry Asante Twum, says the investigative work that exposed corruption in Ghana football could be a factor for the poor showing of referees in the just-ended Ghana premier league.

During that period, the country lost 61 referees through bans after they were captured on camera in the Anas Aremeyaw Anas’s Number 12 corruption exposé, released in June 2018.

Fifty-three referees out of the number were given 10-year bans while eight had lifetime bans.

In the just-ended Ghana premier league season, a number of referees were penalised and banned for poor officiating by the Referees’ Review Panel.

In an interview with Luv Sports, Henry Asante Twum said the many years of inactivity and loss of some seasoned and experienced referees to the #12 exposé contributed to the poor refereeing in the just-ended season.

“It’s a fact because through the Anas exposé we lost most of our top, top referees, at the time. Aside from the Anas exposé, one other thing we lost sight of is the fact that we have these referees who go to training and go back to sleep. Because in 2017, we completed the season, in 2018 we were unable to complete the season because midway through the year there was a mini-tournament for the clubs. 2019/2020 we started the season very well in December then in March it got truncated and eventually suspended in June. So how active have these referees been in the last three seasons?” he quizzed.

According to Mr Asante Twum, the frequency of practising guarantees experience on the job which the current crop of referees lacks.

“Unfortunately they [referees] go for the training you give them all the materials and after 10 matches the season is off and how do they improve? So, some of them even go the whole year or whole season without getting matches. Because you practise, you go to different games and you learn, you build on it and you get better. Unfortunately, because we have not had a full season since 2017, most of these referees have lost out in terms of the practicality of the game,” he said.

Henry Asante believes Ghanaian referees need consistency on the continent to enhance their level of competence.